The Get Ahead offers strutting neo-soul with a Northern attitude

The Get Ahead's Volcano is available now. 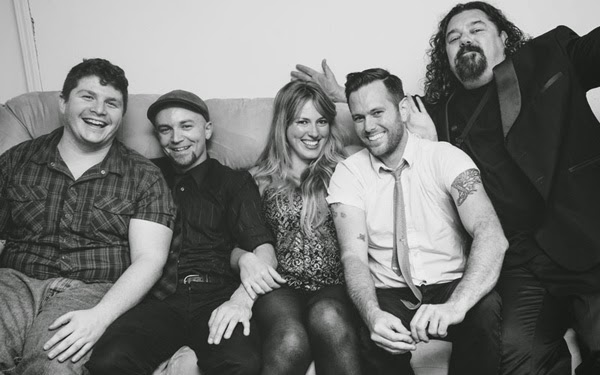 B
0    1 Google +0  0  0
Portland, Oregon may be known as a hipster burb (see “Portlandia”), but it also has a vibrant, many-sided independent music scene. The town boasts indie rockers, first-class jazz players, an Americana/roots music community, and with the five-piece the Get Ahead, one heck of a neo-soul band. On the group’s first full-length album, the 40-minute, self-released Volcano, the Get Ahead showcases a soulful, party vibe dripping with passion, RnB and slowly-simmering rock. On most of the 11 tracks, singer Juliet Howard and guitarist Nathan Earle trade vocals while they sing about couples stumbling into mutual attraction, women rushing into infatuation and kicking out cheating lovers.
During the pumping, sax-soaked “Little Devil” the Get Ahead manages to echo the sizzle and strut of Sharon Dap and the Daptones while maintaining their own individual style. Urban blues burnishes through the striding “Take a Shine,” where a plea for togetherness turns into a sweaty workout for Steve Johnson’s searing and deep baritone sax, Howard’s stinging guitar licks and a tight rhythm section which mirrors the Rolling Stones’ historic Bill Wyman/Charlie Watts rhythm team. With “Earn It,” the band echoes the early rock-and-soul work of the Bellrays via a wicked, wah-wah guitar intro, a four-on-the-floor drumbeat and Howard’s hard-hitting vocals.
While most tunes aren’t moody or restrained, the band effectively ebbs down to a muted smolder on the late-night number, “Moonstricken,” where Howard and Earle sing about how desire can make anyone get a bit crazy. But by the record’s conclusion, the Get Ahead put their forceful energy where it counts, with the commanding “Dollars to Doughnuts,” a modern rock/soul treatment reminiscent of Black Joe Lewis. While the Get Ahead is probably best experienced in a live setting, Volcano is the next best thing to a sweaty Saturday night of grooving, dancing and throwing back some of your favorite drinks.

The Get Ahead's Volcano is available now.
Grade: B+

Posted by xokayteamac at 2:41 PM

Email ThisBlogThis!Share to TwitterShare to FacebookShare to Pinterest
Labels: caps circle, cd review, the get ahead, xopublicity