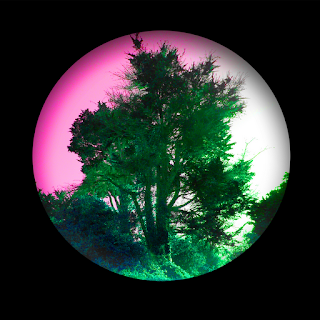 After checking over my last dozen or so reviews of up-and-coming indie bands, I've noticed a theme. I keep mentioning time machines, more or less, and how most of these young musicians focus on a specific year of rock as an artistic model. It's like all those 21st century teens walking around in Led Zep tees; rock and roll has folded back on itself and all innovation comes from borrowing liberally from the past and hopefully coming up with something distinctive. Once you've picked 1966 or 1971 or 1978, then it's all just a matter of whether you include The Wink. You know, The Wink is that subtle hint that tells your audience that you know it's 2012--usually conveyed through some modern studio trick such as a digital sample--just so you're adding something new to the musical history archives. But is The Wink actually The Flaw? Shouldn't you just commit to the idea that you're retro, and not come up with ways to distance yourself from your obvious influences?

Some bands avoid The Wink better than others, usually by making a particular recording sound like it was accidentally found in the vaults after several decades of obscurity. I don't think I've heard anyone pull off this trick better than Electric Shepherd. On their new album, The Imitation Garden, this psychedelic jam trio from San Francisco has emerged from their chosen time warp so remarkably intact that you'll think this is one of those '60s garage band reissues from Sundazed Records. You can almost smell the oil stains on the concrete. Do you like spacy vocals dripping in reverb, or dramatic cymbal crescendos that frame the sort of lyrical flourishes that bands like Can and The Doors used as signature touches? Well, settle into your beanbag chairs, cuz Electric Shepherd just pulled into the driveway.

I suppose if The Wink exists in The Imitation Garden, it's that Electric Shepherd's music isn't nearly as drugged out as it sounds. It's full of innovation and intelligence. The jams are challenging and metamorphic, drawing from all those decades of sound and cherry-picking those ideas that seem unexpected and yet logical. Sonny Pearce's drumming, in particular, sounds like Nick Mason after a hundred weekends of drum circles in some Hashbury park. While Mark Nelsen's vocals are borrowed from the first chapter of the Blues-Rock Singer's Primer, his guitar sounds are many--he might be one of those collectors with a room full of heavily-played Rickenbackers. Tommy Anderson's bass, reticent and supportive, is as steady as it is fuzzy. 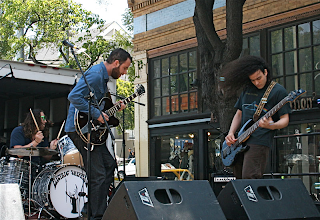 That description sounds like at least five or six new bands I've heard this year, but what sets Electric Shepherd apart is that they are complete submerged in their musical ideas, as opposed to merely using those sounds as a strategy for defining a specific genre. In other words, these guys aren't saying "Listen to us...don't we sound like one of those cool bands your parents listened to in the '70s?" It's more like, well, these three guys started jamming together and this is the music that flowed from their fingers. While it's certainly informed by '70s blues rock and psychedelia, there is no winking in this music--just playing. While their name is an allusion to Philip K. Dick, not Kurt Vonnegut, Electric Shepherd is as unstuck in time as Kilgore Trout.
http://thevinylanachronist.blogspot.com/2012/11/electric-shepherds-imitation-garden-on.html
Posted by xokayteamac at 11:24 AM