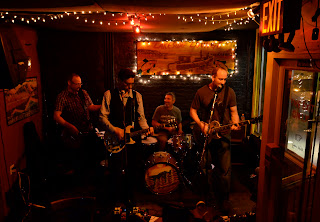 All I had to do was listen to first single "Little Black Heart" to know I was going to like this band! The Sweet Life is their name and "it is the sweet, simple things of life which are the real ones after all" (Emily Dickenson) These guys remind me of The Hold Steady,  Drive By Truckers even the Black Crows, and Elvis Costello.

Not sure how well they do in NYC but they would be huge here in Portland Oregon! They claim to be into playing dive bars, if they ever play outside a dive bar I think I would stop listening to them. They are so the definition of upper cool DIY alt country, prog rock, and stoner rock!

Moving on from stand out track "Little Black Heart" my favorite track on the album is "Corner of His Eye" this song gives you a real stoner rock vibe. The guitar solos which make up most of the song are jammy and prog. How do I get that song on vinyl! The vocals almost remind me of an Elvis Costello.

The name Mud, Blood & Beer is cribbed from a line in Johnny Cash’s classic “A Boy Named Sue”: “Kicking and a’ gouging in the mud and the blood and the beer “which they claim is a perfectly apt description of who we are and the music we make. 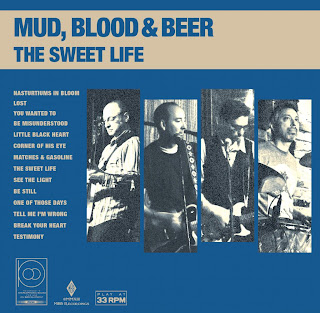 My only complaint is their artwork.... it through me for a loop. They should have a super artsy cover or even only put this out on a picture disc! I almost didn’t listen to them because of the artwork. I mean I get they might have been going for the throw back look. But I thought that was what I was going to get with a listen. Some advice for bands...make your artwork non genre specific that way a writer or editor will want to listen to it just to see what it is. And my personal preference never but an image of yourself on the cover.