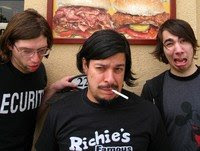 "Taking influence from the taste of trees, unyielding light, tigers’ bellies, desert mountains, upside-down submarines and the ghosts of martyrs, the Unit Breed creates a surreal experience that bends reality, sight and sound."

It looks like the crowd at Thirsty Pagan is in for quite the show June 6.

Some highlights from the group’s tantalizing/slightly confusing bio: “For the last decade, the Unit Breed has been constantly touring, recording, damaging ear drums and expanding minds across the and . The group has a strong DIY ethic, producing six full-length, home-recorded albums and a similarly impressive amount of homemade visuals, music videos and paintings. Taking influence from the taste of trees, unyielding light, tigers’ bellies, desert mountains, upside-down submarines and the ghosts of martyrs, the Unit Breed creates a surreal experience that bends reality, sight and sound.”

Intrigued? Read on. The Budgeteer recently sparred with the prolific group’s mastermind, Joe Demaree, for another installment of “5Q.”

Budgeteer: For those of us who haven’t experienced the Unit Breed in the flesh, what should we expect from your show?

Demaree: Storytelling, building rhythms and melodies, visual bewilderment, peaks of clarity and much confusion — all in an effort to search out answers to base more questions around. Or, possibly, just three long-haired travelers happy to play a great brewery and city again [who are] looking forward to seeing old friends and making new ones.

How would you describe your sound? Do you guys have an intimidating stage presence?

I heard you’re quite adept at air guitar — is this true? Isn’t that just something people without any musical talent are supposed to enjoy?

I’m actually competing as “Captain Nowhere” in the day before we arrive in .

Air guitar isn’t about making judgments; I’m not so sure what it’s about, but it’s one of the funnest things I’ve done. I better get my outfit together and start practicing those pelvis thrusts!

Do you think your career would be in the same place today if the Internet weren’t around? Do you ever miss promoting shows the old-fashioned way?

Never been too good with what-ifs, but it sure is easier to promote and book with the Internet around. Before, I had to call promoters and venues from random phone booths in random towns off of random highways just to get directions. I think in the future we’ll try flying a banner above towns behind a crop duster.

Finally, in addition to being an incredible artist and musician, you’ve also created a board game — can you share any details about it?

I’m working on making this game available before Christmas.

It’s a touring strategy board game called “Shut Up and Play!!!” You book a tour, build a following, have band fights, evade the cops, jump on shows, blow all your money, break down, have drunken dance parties … so it’s pretty much just like touring but you can do it in the comfort of your own home.

Posted by xomargaret at 1:33 PM