The Smoking Flowers' 2 Guns on CD 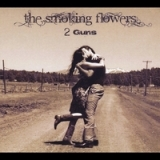 It's not that I'm jaded or have low expectations when it comes to listening to a CD from someone new, but it's gotten to the point where I'm floored when I discover someone with true talent and originality. Such is the case with the new album from the Smoking Flowers, 2 Guns. Perhaps it's because Kim and Scott Collins, a Nashville-based singing duo who draw obvious comparisons to Gram Parsons and Emmylou Harris, have been around for a while, opening for such groups as the Black Keys, Ben Folds Five, Ziggy Marley, Concrete Blonde and the Strokes. They've been performing since shortly after they met in 1998, so they're seasoned and not the typical twenty-year-olds who dream of hitting it big while struggling with the pitfalls of such naivety.

The first thing you'll notice about 2 Guns is Kim's voice--despite the aforementioned comparisons she doesn't have Emmylou's delicate warble. She has big pipes and sounds a lot like Ann Wilson from Heart (although on "Something I Said," she seems to channel Hope Sandoval from Mazzy Star in the quieter moments of the song). She has a beautiful, impressive voice. Scott, on the other hand, has a more casual grumble that grounds her to the music and keeps her from flying away. They have a loving, familiar way with harmonies that illuminates the years they've spent together. Second, they're damn fine songwriters, and these 13 songs are rich with confidence and craft. You won't find any filler here.

Adding to the poignancy of 2 Guns is the revelation that Kim just emerged victoriously from a battle with breast cancer--the album was actually recorded last year and was delayed until she recovered. None of this leaks into the hard-bitten spirit of the album, for obviously temporal reasons, and what emerges is a Western adventure of sorts, inspired by a Route 66 roadtrip. We're talking about the real 66, the dirt road itself and not the fractured sections of I-40 we know today, and the evidence is there on the cover of the album. Kim took this from the hood of their car. That's them, and that's the road, and that's a real and heartfelt kiss that's captured. In fact, 2 Guns is the name of an Arizona ghost town the couple visited. The lonely surreal atmosphere of that visit permeates the album, where their love is the biggest thing on the horizon. 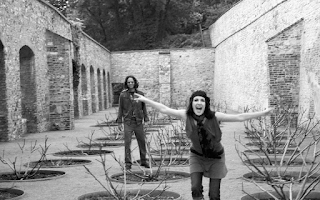 It's rare that an album captures this kind of unabashed emotion without resorting to hip distancing devices or a wall of sound. On songs like "El Matador" and "The Juggler," you hear the celebration of a couple in love. This is not the couple who embarrasses everyone else in the room with their unbridled PDAs, but a couple of poets who can express such things in a way you haven't heard before. Oh, and I haven't even mentioned how much this album rocks--just in case you were under the impression that this was an album of soulful ballads. ("Pistol Whip," for instance, sounds like a countryfied version of Queen's "Sheer Heart Attack," if you can imagine that!)

This is great stuff, and I highly recommend it.
http://thevinylanachronist.blogspot.com/2013/06/the-smoking-flowers-2-guns-on-cd.html?m=1
Posted by xokayteamac at 12:43 PM

Email ThisBlogThis!Share to TwitterShare to FacebookShare to Pinterest
Labels: 2 guns, the smoking flowers