BIG NEWS: REVOLT REVOLT has finally announced their upcoming release "Wild Unraveling" and its release date of Aug 4th. And a full list of May west coast tour dates! 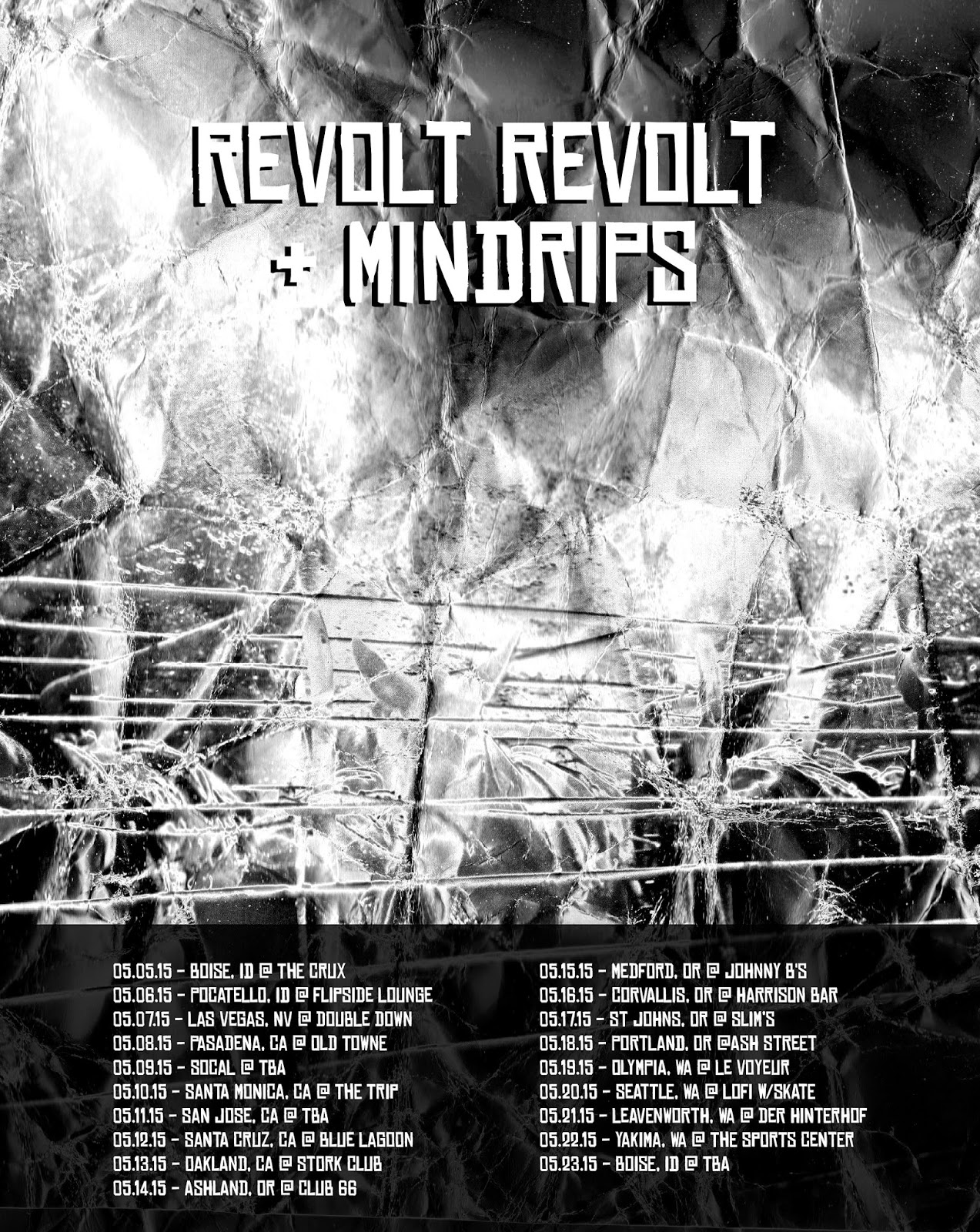 The music of RevoltRevolt incorporates simple 60s garage band drones, hard rock, industrial noise, opera and space music to produce a challenging, mind altering experience. On Wild Unraveling, they take their driving, noise drenched, delicately nuanced sound in surprising new directions. "The lyrics and music on this record are about being on the edge," says group founder, guitarist and singer Christopher Bock. "I relate a lot to the wilderness, I feel that we are beautiful, unique, interesting beings, all on our own epic journeys. The album title implies letting go and opening up to the wild. The songs all talk about being on the edge, not knowing, realizing that nothing is sure in life, but change."

After a lifetime of playing in bands, Bock took a brief time out from music, returning in 2007 to start Revolt Revolt. "I had a friend mad enough to join me as a duo and we began playing gigs, touring like crazy" Bock says. "We gradually evolved into today's quartet with Jake (Fredrickson), who is a tightly grooved eclectic bass player, Ben (Wieland) who delivers dynamically solid killer drums. Guitarist Mike Muir has the balance from a delicate touch to a definitive shred; he's the perfect compliment to the band and my dark, chord heavy approach."

The adventurous sonic palette and open-ended approach to the recording of Wild Unraveling allowed band members to give full expression to their creative impulses. "I wrote the majority of the songs on our first two albums, Chordata and Latah Nights," Bock says. "This record was a cooperative venture. We all brought in ideas and developed them together. It was written in three weeks and recorded and mixed in a few months, with producer/engineer Todd Dunnigan (Built to Spill, Caustic Resin)."

"Never Fade" is a droning, cacophonous sound sculpture that sets Fredrickson's subterranean bass, Wieland's wild cymbal splashes and an avalanche of guitar noise produced by Bock, Martsch and Muir against the operatic improvisations of guest vocalist Emma Doupe. "The EP is balanced between taking things too far and reeling them back into place," Bock says. "It's our most intricate, dynamic album. "It really challenged us to move in new creative directions."

RevoltRevolt is the culmination of Chris Bock's long musical journey. "My mother got me a guitar at age 12, after I'd been blown away by a Mariachi group in Mexico City," he recalls. "I learned how to play songs off of the radio. I was captivated by the process of songwriting. My father is a guitar player and my grandmother and grandfather met while playing in a symphony orchestra in France. My fathers side of the family were mostly artists and musicians, and within the family tree is the famous Dutch Golden-Age artist Jan Vermeer. "My step-father was Basque; he sang Spanish love songs around the house while he worked. My mom's record collection included jazz, country, and rock. I liked Punk, Metal, New Wave, Black Sabbath, Dead Kennedys, The Cars, Joy Division and spent all of my lunch money on LPs, until I got a job in a record store. I worked in record stores until 1996."

Bock grew up in Boise, ID, teaching himself Guitar, Bass, Piano, Harmonica, Percussion, and Keyboards along the way. "I had some personal stuff to attend to, and dropped out for a short time, but I found that music is always there waiting. I enjoyed the years playing in other friend's bands, but was looking to take on a new direction. I really dug the idea of embracing life through travel and music. Eight years ago, I started RevoltRevolt to record songs I'd been working on. I've been lucky to have some great musicians on board for the projects we've completed. The current line-up solidified in 2014 and Wild Unraveling is our first collective project. I feel we are right where we need to be right now with Revolt Revolt. Being in a band that puts out records and tours like we do has provided a wealth of experience beyond what I've ever imagined."

Posted by xokayteamac at 3:56 PM