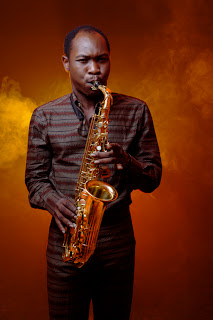 There was hardly room to stand at the Mount Tabor Theater on Saturday night…AfroMassive from Humboldt County opened the show, playing a danceable collection of covers and originals.   By the time the headliner came on, some had scattered into the amateur night known as St. Paddy's Day, which left a little room on the dance floor. 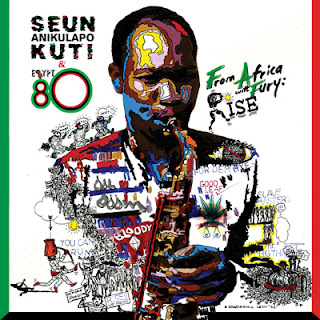 There wasn't a lot of room on stage, though.  Seun Kuti with his fifteen piece band played his entire 2011 release "From Africa With Fury: Rise".  Vocals were added by the Africans, two stunning singers in tribal dress and face paint shaking it like a tambourine.  The youngest son of legend Fela Kuti is carrying on the tradition his father began with band leader Lekan Animashaun, who originally worked with Fela.  Gyrating wildly and spouting lyrics in Pidgin English over the staccato punctuations of a full horn section, Seun and his band the Egypt 80 let all in attendance know that Afrobeat is still very much a relevant art form.
It is a tradition of musical activism and a political movement for social change.  In the title track "Rise," Seun implored Africans to rebel against foreign exploitation.  Seun discussed the Occupy movement in Nigeria and the folly of the American campaign to criminalize marijuana, encouraging the audience to sing with him as he played "The Good Leaf."  Although the only Africans in the crowd were members of the band's tour, I think the message is spreading judging by the sweet smell in the air…
-EARL ELLIOTT 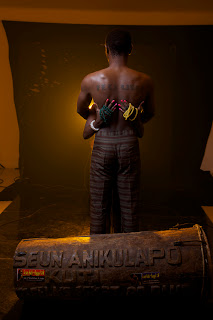 Posted by xokayteamac at 7:59 PM