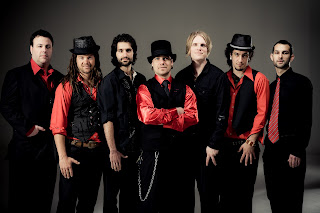 I’d been gearing up for last Saturday night at the Goodfoot lounge since seeing Afromassive open for Seun Kuti at the Mount Tabor Theater recently.  The house was packed (with couples-- no single women, unfortunately).
As usual at the Goodfoot, things didn’t get started until late.  This meant that I had to wait around for an hour or so to see a band called Tapwater.  As it turns out, this happens to be the most aptly named band of all time; their music is lukewarm, tepid, and can be accessed from a kitchen sink just about anywhere.  The front man, a young Paul McCartney look-alike, picked a banjo utterly absent in the mix at the soundboard.  The drummer looked too young to get into the venue, and the keys seemed to be the only thing holding the band’s performance together.  The light show was better than the lyrics.
Around twelve thirty, the headliner finally began blowing a few notes for the sound check.  They opened with “Everybody’s Got to Go,” and then went in to Kool and the Gang’s “Let the Music Take Your Mind”.  The performance featured a cameo from Daniel, founding member of Portland’s March Forth Marching Band on trombone.  The horns even did a short tease of the opening to Talib Kweli’s “Train of Thought” album.  Their tune “Stumbing” had just about every set of knees in the place bouncing.  All in all, I’d say Afromassive is the best thing to come out of Humboldt County since, well, you know…
-Earl Elliott
http://www.afromassive.com/