Notes from Left of the Dial: Câlisse and more 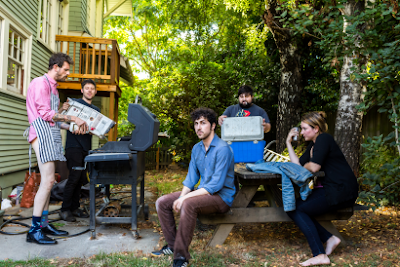 In Notes from Left of the Dial this week, Nooga.com spends some time with new music from Câlisse, Stranded Horse, My Golden Calf and Sparrows Gate. What have you been listening to this week?
Câlisse, "Stay"
It began, as many things do, with an introduction. Musicians James Collette and Morganfield Riley were both soundtracking different filmswhen they were introduced by a filmmaker friend. By the next Halloween, they were performing together. Drawing together some musical friends, Collette and Riley organized a cover of Neutral Milk Hotel's "In the Aeroplane Over the Sea," and these sessions went so well that when Collette announced he was recording a solo album, Riley volunteered to produce one of the songs. Their collaboration blossomed and grew to include other musicians, becoming the foundation for Câlisse. The group will release their debut record, "Farewell Black Sheep" on April 15.
On their new single, "Stay," the band creates a sound that feels drenched in the classic indie rock years of the early '90s but still manages to sound timely and timeless. The guitars are thick and sticky and are filled with ragged distortion and a fuzzed-out attitude. Buried beneath all the hiss and grit, though, is a churning melody that sticks to your brain and anchors the track while also lifting high into the upper atmosphere. It's catchy and hits you like a fist to the chest. It's rare that a band understands this contrast between loudness and melody so well, but Câlisse make this awareness seem nothing more than the next logical step. If "Stay" is any indication of what we're to expect from "Farewell Black Sheep," then April can't get here soon enough.
http://nooga.com/172122/notes-from-left-of-the-dial-calisse-and-more/
Posted by xokayteamac at 6:59 PM