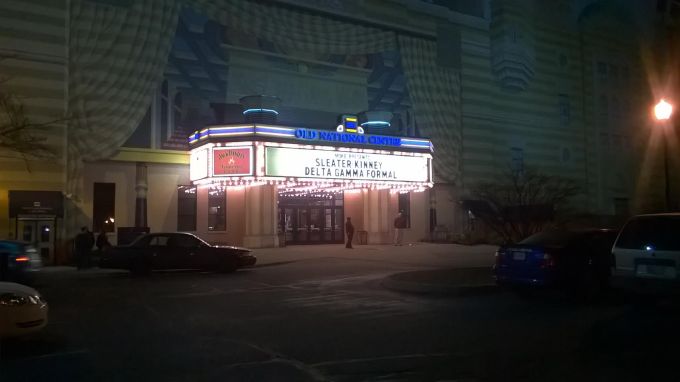 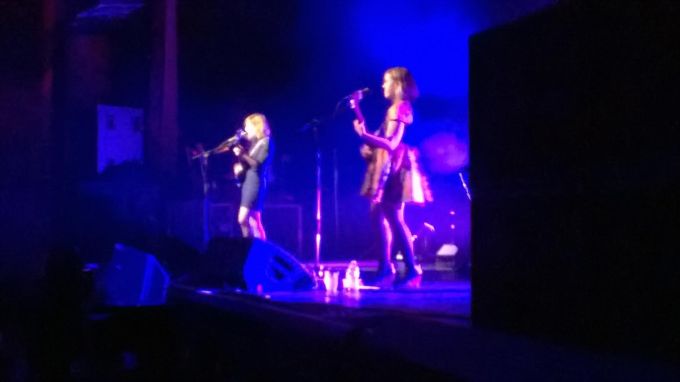 After that near-decade of silence, Sleater-Kinney is revealed on-stage, flanked by the surreal and not-so-real antiquities of the Egyptian Room. It’s fitting as they actually ARE the reality in the room.  The Egyptian Room is a concert venue in Indianapolis owned by The Ancient Arabic Order of the Nobles of the Mystic Shrine, more commonly called the Freemasons; outside is a minaret and a tiled sun-and-camel-in-the-desert scene, and inside has enough stained glass and Egyptian motifs to make you want to tell stories. 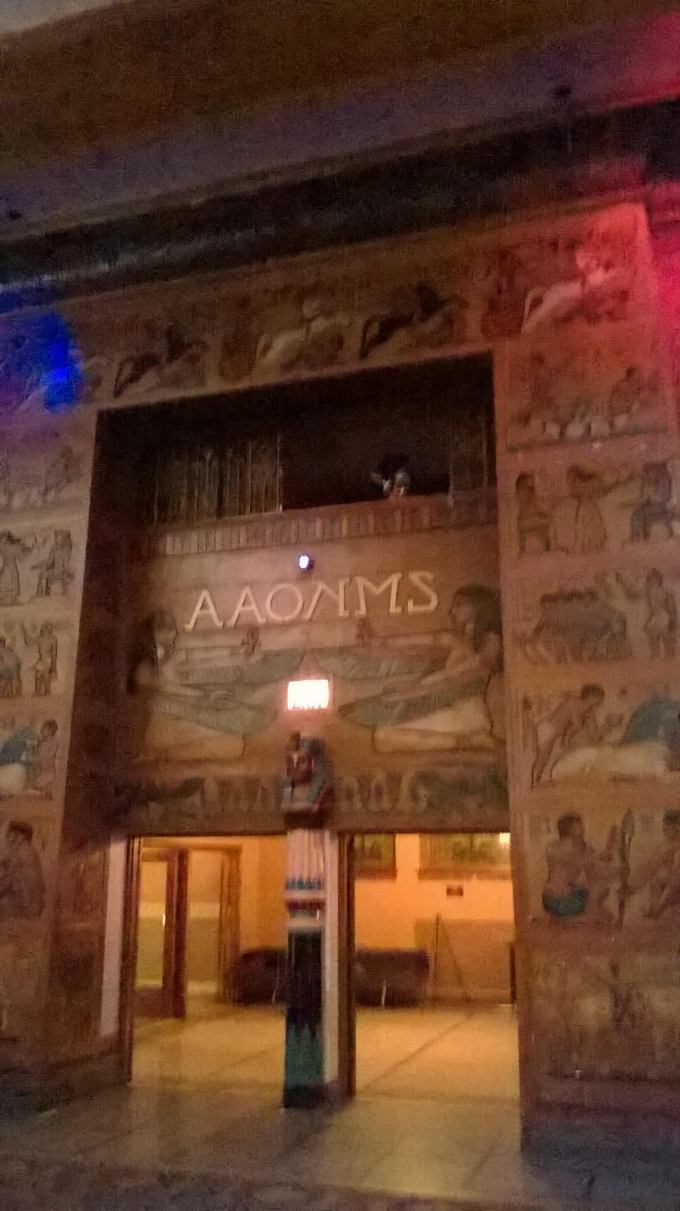 And that’s what S-K does.  Corin tells those stories with her voice and guitar; Janet’s drums push you, always emphatic, always driving the story-line; Carrie assails you with her guitar, adding that counter-point you missed in the plot. 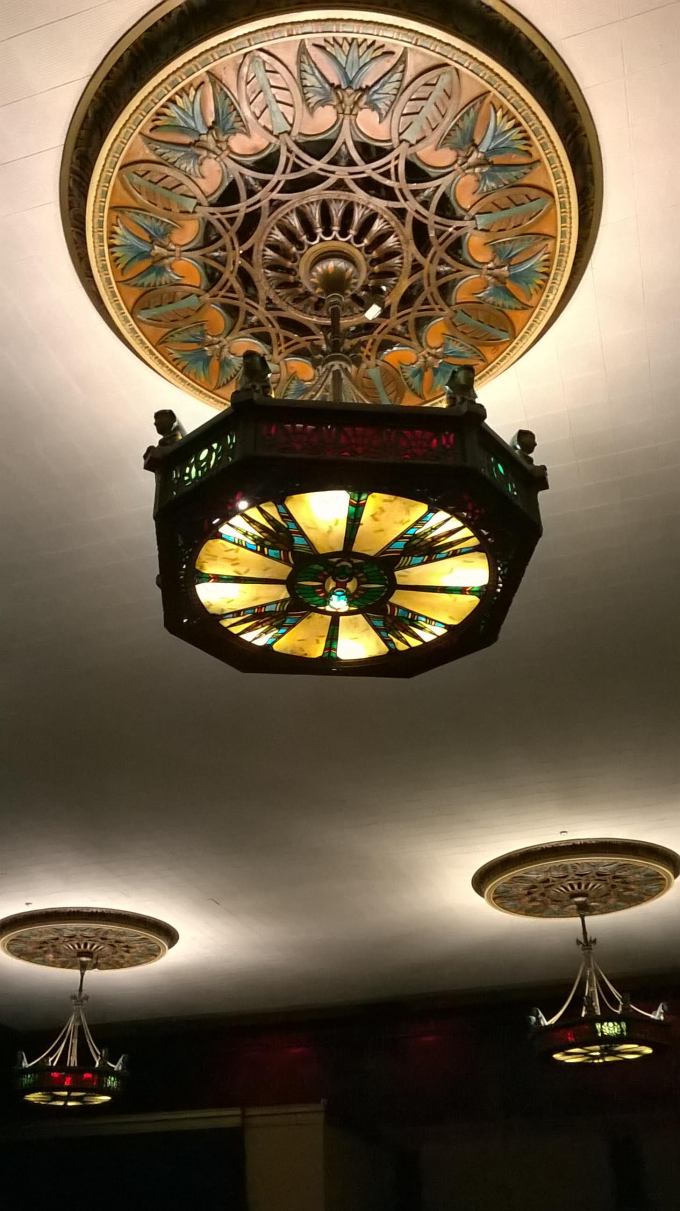 In their song ‘Price Tag’, Carrie’s guitar is the repartee to Corin’s vocals – it seems innocuous enough initially, stocking the shelves, working the store, but then – we never really checked the price tag and lured by the devil, the price is too high. S-K has been there, they are no longer the riot-grrrls but have experienced the problems of verisimilitude, with the relative truths and falsehoods of life.  And a twinge of levity as well. 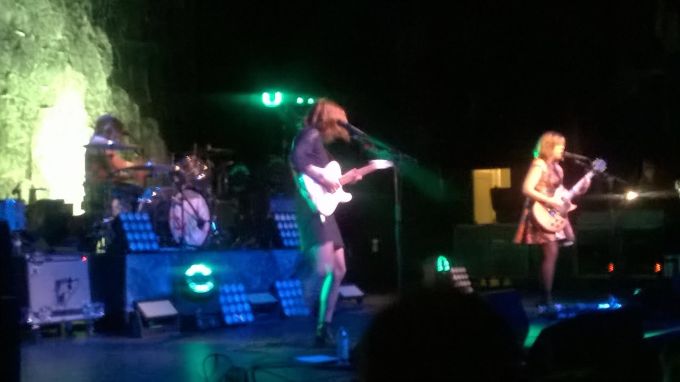 If you scan the song titles played, you get the idea – the anthemic (and atomic tourist referencing) ‘No Cities to Love’, ‘Youth Decay’ (I’m curious whose sense of humour is in that title), ‘Bury Our Friends’, and ‘Far Away’ – there is a sense of experienced life, upbeat melancholia, and situational awareness. 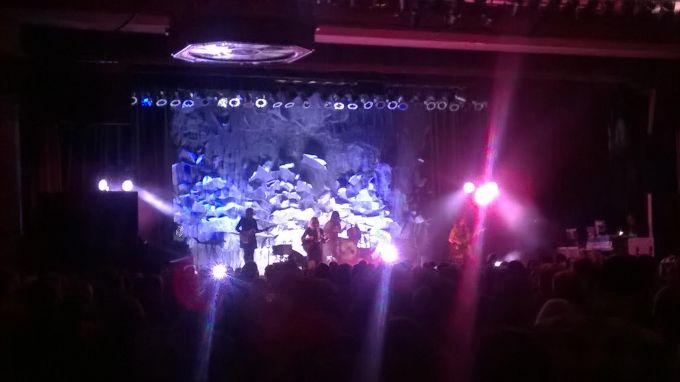 On ‘Entertain’, Carrie prowled like a cat and sang an intriguing anti-rhythmic lyric until the chorus; Janet was the wind-swept drummer throughout, and Corin soared on guitar and vocal. But then, there was the long pause and the pose at the start of ‘Jumpers’ – backlit, standing still, shadowy backdrop flailing in a breeze – then, BANG, away it went.
Nearing the finale, Corin had an emotional moment of silence for the Colorado Springs Planned Parenthood attack, and followed it with ‘Gimme Love’, with the song knowing it is never enough, wishing for a little more, running from the wickedness this life imports. Then followed it with ‘Let’s Call It Love’ – unlike what’s implied by the title, it’s not ambivalent but triumphant, with the lighting artist using her LED lights set to a fiery orange for the climax.
At the end, S-K played the crowd-pleasing ‘Modern Girl’ – the fitting finish – melancholic again but also with a picture of a sunny day. And that is the modern Sleater-Kinney: triumphantly surviving and experiencing life at its best and worst, telling stories with a picture of a sunny day. Maybe even with a camel in it.