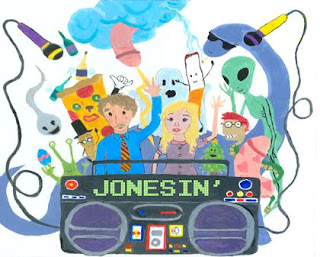 I’m a fan of the most excellent show How I Met Your Mother, with my favorite episode being “Slap Bet” (Season 2, Episode 9), mostly for introducing two key running jokes to the series: 1) the “slap bet” that exists between Marshall and Barney, and 2) the music of Robin Sparkles. According to the show’s chronology, Robin Sparkles was the stage name of character Robin Scherbatsky from her time as a mall-touring Canadian teenage pop star in the ‘90s. And yes, the show explicitly poked fun at Debbie Gibson, Tiffany, and Canadians when Robin stated that the ‘80s didn’t come to Canada until the mid-‘90s, explaining why teen girl pop stars were still singing in malls in Canada, much to the delight of Ted, Barney, Marshall, and Lily. The twist is that the anachronistic fake pop singer (with two videos, “Let’s Go To The Mall” and “Sandcastles In The Sand”) has a viral MySpace page in the real world that celebrates her “music.”


In an equally surreal alternate universe, Matt and Jenny Jones of Jonesin’ should also get to experience that sort of underground cultish affection. The couple has recently released a record entitled “Hi, We’re Jonesin’” and it too embraces the same uber-cutesy ‘80s synth-pop as that of Robin Sparkles, but does so much more earnestly. Using a small fleet of classic synths and processors (including a Yamaha DX100 and Casio CTK-550), this ten-song project features bouncy keyboard runs over some rather retread (but occasionally quite catchy!) beat patterns alongside “aw-shucks”-inducing boy-meets-girl vocals and lyrics.

Yet, as crass as this might sound, Jonesin’ could almost be interesting, except that there are instances when the group comes across as a novelty act, right down to Jenny Jones’ highly affected (and often annoying and grating) teeny-bopper vocals. The result is an album that seems more like performance art than an actual left-of-center quirky retro pop group. The songs themselves are charming little ditties about a young couple falling in love, including tracks about reading Harry Potter to each other, shoring up resources for the impending apocalypse in 2012, and enjoying ice cream sundaes together. Yet, for every song like “Rollerskates” or “Ice Cream” that rings with potential, there’s an offering like “Lil Wino” or “How Much You Wanna Bet?” that only makes me flip to the whatever might be next.

“Hi, We’re Jonesin’” probably won’t change the world with its re-imagining of romantic, high-school-dance-ready ‘80s pop, but if Robin Sparkles can have a fake career on MySpace (courtesy of CBS money), then Jonesin’ deserves just as much (if not more). In my estimation, if the Joneses were to employ more traditional vocal techniques, that dream might actually become a reality.