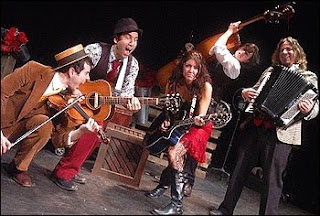 Live!
Who: Caravan of Thieves When:: 8:30 p.m. Monday Where: Iota Club and Cafe, Arlington

A residency -- when a venue commits to an ongoing series of shows by one band -- is a great chance for an audience and a group of musicians to really get to know one another. It's also a clear sign that a venue believes in an act's potential to grow a local fan base. What's needed, then, is the kind of band that has an expansive style that varies in content but not in quality, so that each night is a unique event, bringing people back time after time.

Caravan of Thieves is that kind of band, and Iota has committed four evenings -- Monday, Sept. 21, Oct. 19 and Nov. 16 -- to hosting the Connecticut-based, alternative Americana/gypsy rock group.

The band might be familiar to some in the Washington area, having opened for Dan Hicks at the State Theatre in April. The Hicks/Caravan pairing was a good one in that both acts are hard to pigeonhole, moving among musical styles such as jazz, blues and swing. As Skyscraper magazine put it, the eclectic sound of this Caravan is "a brew of up-tempo, gypsy-styled folk-pop that has a pendulant charm akin to Squirrel Nut Zippers mixing it up with DeVotchKa . . . the result is compelling and colorful."

The band is led by husband-and-wife musicians Fuzz and Carrie Sangiovanni, singers and guitarists who teamed up in 2004, first as an acoustic duo, then in a band called Rolla, which released two records and played hundreds of shows. Early last year, the pair recruited double bassist Brian Anderson, previously of the experimental jazz trio Raisin Hill, and violinist Ben Dean, student of jazz and classical violin and veteran of a number of ensembles, bands and orchestras throughout Connecticut.

Within the band mates' brief time together, Caravan of Thieves has managed to move from support act, performing with artists such as Tom Tom Club, Toad the Wet Sprocket and Trout Fishing in America to club headliners known for a high-intensity, interactive stage show that often incorporates multimedia effects. In the past year, the group has also released a debut CD of 12 original tracks, "Bouquet," that has drawn favorable comparisons to Gogol Bordello and the Decemberists. Accordion player Bruce Martin (he's played with Tom Tom Club, as did Fuzz for a time) guested on the CD and pops up with the band onstage when his schedule permits.

The harmonious vocal interplay of the Sangiovannis is set in dramatic and often comical narratives, while the fleet-fingered violin and acoustic guitar lines and thumping upright bass move at a frenetic pace that's hard to resist.

Catch the Caravan of Thieves at this first of four Iota shows, and it might steal three more nights of your autumn calendar.

Iota Club and Cafe is at 2832 Wilson Blvd., Arlington County. Admission is $12 at the door (tickets are not sold in advance) and limited to those 21 and older with a valid ID. For information, call 703-522-8340 or go to http://www.iotaclubandcafe.com.

Send suggestions for Live! to mariannemeyer@comcast.net. Please write for the mailing address before sending any materials.
Posted by xokayteamac at 6:33 PM