The band name is Transient Songs 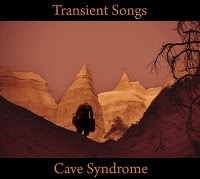 The band name is Transient Songs, the album is Cave Syndrome. Almost seems like it should be the other way around, but it’s not. Transient Songs was formed in Seattle based on a shared interest in ‘70s psychedelic music. John Frum (guitar, vocals) and Jimmy Andrews (bass, multi-instrumental) have taken this interest and made something new out. Slated for release in March 2010, the LP Cave Syndrome is a follow-up to the 2008 EP Plantation for Your Youth, both on Indian Casino Records.

Most closely defined as psychadelia, although not confined to the restraints of definition, Transient Songs has been compared to CSNY, The Byrds, post-sandbox Brian Williams, The Jesus and Mary Chain and others from the era that inspired them. However, emulation isn’t everything. Transient Songs employs elements of the psychedelic genre— dark lyrics, vocals and a wide, eclectic range of musical accompaniment— in a progressive, unique, soothing way.

Frum’s vocals are steadily monotone and emotionless throughout, leaving the words and music to do the job. Largely instrumental, the vocals tend to become a background to the music, including the usual bass and slide parts as well as string work (including cellist Ruth Davidson and violinist Amanda Lempreicht. Cave Syndrome is a definite product of place and genre, but the duo make it their own with the unique song-writing style of Frum and the wide ranging instrumentals of Andrews.

Disorienting, even disturbing at times, the sound of Cave Syndrome grows on you the more you listen to it. This album is best listened to lying on the floor surrounded by candles or incense to get the full effect. Immersion in the music is key; otherwise you’ll be lost along the way.