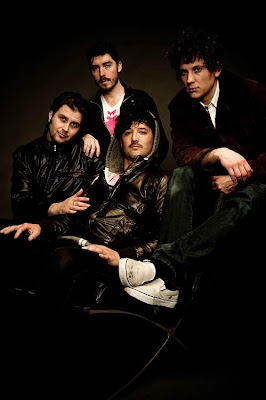 The San Francisco Bay Area-based foursome has been around for nearly five years and is arguably one of the more successful local acts for that very reason of dedication.

The band plays a mixture of catchy pop music with a heavy infusion of dance hooks, featuring bright jangling guitars, a deep and vibrating bass, steady solid drumming and breathy vocals bordering on seriously sexy – think Justin Timberlake’s pipes with a backup band akin to something like Hot Hot Heat or the Killers – but with a twist all its own.

“It’s just the music that came out when we started playing,” Meyskens said.

The natural ease and musical chemistry between the members is undeniable, and the group’s songwriting process is demonstrative of this very idea. When practicing, the band members will all start working on a song together by jamming until something formidable appears.

“We kind of play until the song comes out,” Meyskens explained.

Not long after the group officially formed, it self-released an EP, “Transmission”. Music for Animals then began playing small shows in and around San Francisco, until the band caught the attention of the folks at Three Ring Records, and was promptly signed to the label.

Next came the release of the first full-length, a self-titled album fondly referred to as “The Red Album”. Subsequently, Music for Animals took off on a national tour and gained a following, which eventually made the band a favorite with college radio stations nationwide and local station Live 105.

Since then, the band has gone on additional independent tours, and played South by Southwest last year. The group is now in its third year playing Noise Pop, but after two years of playing parties, tomorrow’s show at The Independent will be its first official showcase show, something the members are excited about.

Music for Animals also recorded another release with a producer it met on tour, but hasn’t made definitive plans about when and how to put out a recording in conjunction with a label.

“We’ve put it out in a couple different forms,” Meyskens said, referring to the availability of the album in digital formats like iTunes. “[But] it still hasn’t been officially put out, except for by us.”

And the group can’t say for certain if the EP – “If Looks Could Kill” – will ever be released through venues other than the band itself, particularly with the advent of online distribution for artists.

“The whole thing about the industry now is that you can really do a lot on your own…[and still] be successful,” Meyskens said.

Not only that, but the band is working on new material, which could end up released through a label with the songs from the EP, or alternately could be the basis for a new album.

But like most every band working hard to promote itself independently, Music for Animals struggles with the difficulties of musician life, particularly the balance between wanting to play music full-time and having to make a living.

“Everybody kind of thinks that you’re doing really well, [but] it’s hard to just survive off music,” Meyskens shared. “That’s all we want to do and there [are] ways to make it happen.”

Yet the road to becoming successful isn’t easy. And many musicians have to decide if its more important to make money or to make the fans happy. Music for Animals is one such band that has the tendency to put the fans first. The group routinely sacrifices making profit off its music and instead hands out download codes for free at shows, in order to gain more exposure.

“We want everybody to leave with music,” Meyskens said.

And that’s what is mainly unique about Music for Animals: the band’s overt love of its fans. Aside from the Bay Area, its largest fan base is in San Diego, a city the band makes a point of playing nearly once every six weeks.

As of late, the group’s main focus has been on playing shows on the West Coast, but members say they won’t limit themselves to California.

For more info: Music for Animals plays the Noise Pop Festival tomorrow night at The Independent, opening for Nico Vega and The Soundtrack of Our Lives. 8 p.m., $16, 21+
More About: Interview · Band Profile · Noise Pop · Festivals

Posted by xokayteamac at 9:17 PM