Pictures of Then review on JERSEY BEAT 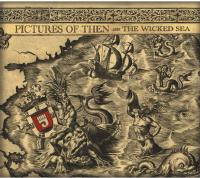 Pictures of Then - And the Wicked Sea (Picturesofthen.com)
Pictures of Then didn’t throw away any of their vinyl records, epically their Manfred Mann, The Small Faces, and 60’s British Invasion records. Armed with those pop rock nuggets, they shake the tree and plant some of their own musical roots on “And the Wicked Sea.” Well developed songs like “The Big Sell,” “Lands Uncharted, and especially “Nowhere is Somewhere,” (I dare you not to sing along with the catchy chorus), barely break a sweat, as the poetic, unpretentious lyrics offer thoughtful perspectives without losing their rock ‘n’ roll vibe.

The band never succumbs to blandness, nor do they spread any clichéd writing around. You want to hear what the next song is about, and the next, and the next…

Featuring slippery bass chords, melodic vocals, strumming guitars, and on-the-beat drumming, Pictures of Then make their mark by ingeniously adding and subtracting whatever they think it will take to make a good song, and they’re usually right. Sometimes it’s just the bass, simple drumming, and frugal bits of guitar, over a quiet vocal that are propelled by the rest of the band’s musical lustfulness.

Unlike some albums that end up labored and dull, “And the Wicked Sea” has an emotional drive that never prods along. 12 sturdy songs that hold up, and have plenty of personality!
Posted by xokayteamac at 4:52 PM