BONEDOME review on The university times! 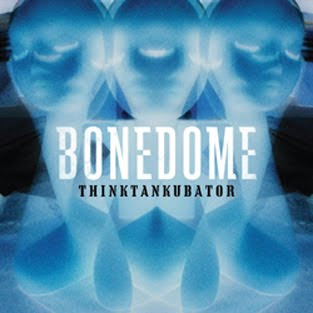 Bonedome: Revives 90’s alternative and grunge
Texan alternative group Bonedome released “Thinktankubator.” The name is incredibly indica- tive o what the album becomes. It seems to be an out-o-the-ordinary musical experience intended to orce a new perspective on its listeners. The Dallas-based group was ormed under the leadership o Allan Hayslip, who intended the group “as the nom-de-rock or songs and peror- mances that have never quite t in his other bands,” according to the website

The music is a strange combination between Frightened Rabbit, Green Day and Dishwalla, with the same eccentric, esoteric and cynical lyrics stan- dard in 90’s alternative rock. I you listen to the “90’s lunch” on 106.5 and want a resh band or a similar sound, Bonedome is or you.

Whether he’s looking at an outside situation ironically or being brutally, apathetically honest about a situation o his own, he turns the normal breakup song on its head. This is a consistent pat- tern. Bonedome turns normal sounding alternative music into an interesting play on the expected; He turns normalcy into abnormality. The most brilliant o any o the songs on the album in this way is “Custody Lullaby.” What’s normally considered a way to comort an unhappy Not all o the songs impress, however. “I Can Lose You” is not only generic musically, but so are the lyrics. Nothing complex in the way o musical style or lyrics are oered to the listener, with sim- ple lyrics like “i losing me now makes you better somehow, all right” and “the signals we’re used to aren’t very strong.” It’s obvious that’s what the group was going or. The album is sel-described as “a product o a mu- sical omnivore” whose lyrical style is “dark, indeed oten chilling” because o “his massive grudge against the world,” according to the website. All o that is evident in everything the band does. I that was the point, they’ve more than suc- ceeded. The band also proclaimed to encourage on their website, promising that “it’s an album that rewards each urther listening, as layers o guitars reveal hidden melodies and a previously unnoticed line reveals itsel to be a subtly clever bit o vin- dictiveness.” On the second and third play o the album, this is precisely what happened. The album’s better songs will make you thing, and you’ll skip past the less impressive ones on your playlist. Let’s be honest, though. What album doesn’t have songs that displease someone somewhere, even i the listener actively likes the band? I you want a throwback to the shockingly blatancy o 90’s grunge and alternative, check them out. You won’t regret it i you do.
Posted by xokayteamac at 12:38 PM