What are three art school, almost 30-something white boys doing making funky, sexalicious music? Not asking for your permission, Strength is telling you, “Let’s get down” with the release of their second–long, long, long-awaited–album, Mind-Reader. The self-produced, recorded and released album comes out on September 3rd, coinciding with a CD release gig at Holocene with Fake Drugs, DJ Copy, and DJ Patricia Furpurse.

Feeling up MJ and Prince for their goodies, the California-natives but PDX-transplants since ‘03 set out to make a horror-dance album but got distracted along the way by their normal shenanigans of sexy electro-funk-soul. And why shouldn’t they get diverted? …While diverting themselves with their tongue-in-cheekiness. Ridiculous lyrics, indelible riffs and thumping beats make you wanna get up and freak your girl while trying to lay her down. 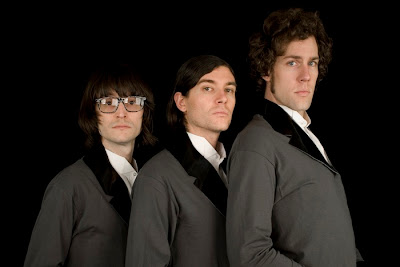 Looking to make a “darker” sophomore album, Bailey Winters (vox), John Zeigler (keys, programming), and Patrick Morris (guitars, programming) didn’t get distracted with the production, it consumed them–every sound is delicately and deliberately placed. This is why it took them so damn long–four years long–for the release of album #2. But being seriously scrupulous doesn’t mean they can’t have fun, including a vampire track (“Blood” with lyrics “My body’s weak, I’m out of time, I need her blood before sunrise”) and a bit of punk rock, albeit still quite smoothly produced punkiness, on the energetic “Disaster.”

“I thought it would be great to just have a punk song, one of our own,” says lead singer Bailey Winters. “And it goes over pretty well. I think it shakes things up a little bit.”

And the darker vibe is plainly typified by the aggressively hitting first single “Metal”:

The guys met at the California College of the Arts in Oakland in 2001, forming a “Weezer-esque” rock band called The Suds. Strength was then formed in 2003, the same year they graduated, after they realized that the real dance party began after the bands, when the DJs started to spin. Post-graduation, they moved to Portland because “John was chasing a girl,” says Winters, but also “it sounded exciting to all move together.” They were not familiar with Portland but it was cheaper and “fun to get away from where we grew up.”

After four years between their first and second album, Strength still retains their sense of humor in their recordings and on stage, where the act is stern and seductive (hilariously so), while they look to tour more in support of Mind-Reader.

You always say so in concert, but you two [Bailey Winters and Patrick Morris] aren’t really brothers, are you?


Bailey Winters: We’re not actually related but I do like saying that he’s my brother. [Laughs]

I can see it… it could be plausible.


We used to get it a lot. I used to wear big glasses like Patrick so I just kinda brought it on the stage.

Live in concert, how much of your show is an act, going into a stage persona?


I’m nothing like the person on stage. If [people] know me from off stage, they’re a little shocked to see me on stage. And if they only know me from the stage, they’re probably disappointed when they talk to me in person just because I’m super laid-back… the three of us are. We’re really mellow people and pretty quiet off the stage.

Every time I see you guys, I spend about half the time just kind of smiling and laughing. Then about halfway through your set, I really get into it.

But really, when you’re singing things like “Rub me down with brandy” (on the new song “Brandy”), how can you not grin?

What inspired you guys to make this kind of soulful, funky, let’s get down music?


We were going to parties at art school a lot. Usually a rock band would go on at like 10 or 11 and everyone would just kinda watch the band. Then after that people would put on records, so there were DJs, and they were always dance records and that’s like when the party started. And I just kinda felt like, “If we could be the dance record instead of the rock band before the dance record, we’d have it made.”

What’s happened during this time?

Well that’s exactly what you were going for when you started Strength.


Yeah, I like the idea of having a band that’s caught between the DJ set and the full on rock band with drums and stuff.

How has your sound changed and evolved since the first record?

Yeah, a song like “Metal” in particular is definitely darker but still has your dance-y groove.

When you start to write a song, are you trying to be humorous about it, tongue-in-cheek?

It’s only eight tracks. Why so short?


I like dance records that don’t have any filler and I don’t want to put any filler on the albums. I don’t want to put a two-minute track on the album just to make the ninth track. I think a lot of the dance records that we listen to from the ’70s and ’80s, they’ve got seven, eight songs. You know some of the Georgrio records have like six songs and they’re fucking good. If you take an album like Justin Timberlake’s Justified… if you cut out like five of those tracks, that’s the only way you can make the album better. So there’s that, and then the other aspect is, we fucking take forever to write songs and we’re constantly editing them. There’s like three of four songs within each song basically.

Why does it take you so long to write songs?


We’re really meticulous and it’s very democratic. We’re all sitting down and writing the songs together and nobody gets to have [or add] a part unless everyone thinks it’s good. When you’ve got a band that’s one person writing all the songs, I can see how you could turn out a bunch more songs than we do. I think the only way that Strength works is if we’re all happy with everything, which can be painful but I think that’s why we’re still together.

You’ve been playing these songs for a while know. Are you pretty comfortable with them?


Yeah, we’re very comfortable and I’m really thrilled to finally be putting this record out because it’s pretty much what we’re playing at our live shows.

Recently when you’ve been playing live, you’ve been covering The Romantics’ “Talking In Your Sleep.”


Yeah, I wanna work out some more covers but that one has just stuck around–it seems to fit into our set. And I like the idea of just coining a song, just taking a Romantics song.

And believe me, you guys do sound damn good when you play it.

Thanks, thanks a lot.

Do you have anything newer that you’re working on?


We’re just getting there. We are going to be working on remixes for a handful of people here in Portland. As soon as we do the CD release show, we’ll sit down and start writing a third album.

Where does the album title Mind-Reader come from?


You know [laughs], we used to have a piece of paper that was above a fish tank at our house and people would just write down ridiculous title names that they’d come up with. [Laughs] Patrick wrote down Mind-Reader and it seemed to stick. It just sounded good and it seemed to fit in with the horror theme but it wasn’t blatant.