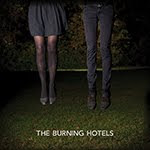 A night in an amusement park is always a memorable experience. The thrill
that a few PBR's and a belly full of elephant ears can bring is almost
indescribable. It's an event that is best left documented in the sands of
time via home video camera. What can make said documentation of the evening
better? How about if you threw in a nice indie pop ditty like "Austin's
Birthday" from Texas-based The Burning Hotels. Their crisp and highly
effective sense of rhythm is nothing short of a perfect reincarnation of the
modern post punk era that has been imitated many times before, but save for
The Strokes or the now debunked Young Immortals, never quite like this.

The Burning Hotels produce a high quality sound that spoon feeds you
teaspoons of pop goodness and a codeine-laced combination of harmony and
disarray. Much like the up-yet-sort-of-down-tempo track "Austin's Birthday",
the video is a classic "living in the moment" sort of rendition of a typical
exploration of America at its most entertaining - a display of commercial
greed (why the county fair of course!). But, at one point in the video the
band stops for a second to ponder something, or everything, as they float
around a slow moving Ferris Wheel. It's in this moment that a real sense of
actual being can be seen in the eyes of this truly
devoted-to-personal-success band of merry Texans. Many more evenings of
laughter and dysfunctional behavior are sure to be had in the future for The
Burning Hotels.

"Austin's Birthday" is the first track off The Burning Hotels' latest album,
Novels.

The Burning Hotels - Austin's Birthday from You and Yours on Vimeo.
Posted by xokayteamac at 12:44 PM