J Minus review of DEVIL MUSIC on Metro Spirit 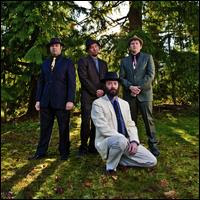 A band’s appearance can be misleading, especially where publicity stills are involved. Tom Jones looks like a flamboyant banker; the Saturday Knights, a great hip-hop group out of Washington state, have a dude that looks like he works at a vegan market. And fronts a hardcore group on the side. Of course, band members typically just stand beside some railroad tracks or lean against a wall, so I doubt we’re supposed to tell them apart anyway.

In the case of J minus, we get a little more imagination, not to mention truth in advertising: four Armani-clad scruffers standing in a wooded clearing, the sun peeking ever so gently through the trees, and the image, for once, accurately reflects the music found therein. The band’s sly concoction of 90s alt-rock, epic-leaning emo, and wry Americana manages to sound both off-the-cuff and streamlined at the same time, and while the path they follow is not of the beaten-to-death variety, they hold to it to great effect. Think Story of the Year, The National, and Dishwalla all attending AA together. Yeah, I like that. That makes sense.

J minus dabble successfully in several areas, so it’s surprising that their only real misstep here is a track likely meant to inject even more variety into the album: closer “Congratulations, You Suck” isn’t a total loss, but a borderline-snarky, acousti-crunk ditty at the end of an album’s worth of emotive, near-flawless power pop (“When the Lights Go Out”) and lived-in balladry (“No Sleep Tonight”) is questionable game-planning. Still, we’ve got ourselves a winner.

read in full here as well
Posted by xokayteamac at 3:48 PM