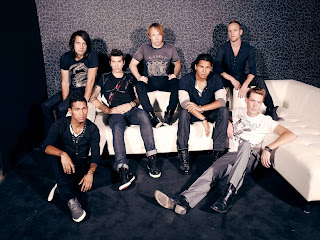 Electro-rockers Paper Tongues got their lucky break before they were gigging around their hometown of Charlotte, North Carolina — something that doesn't happen often in the fickle music industry. Brian West, who produced Nelly Furtado's Whoa Nelly, invited the band to Hollywood three years ago after discovering their music on MySpace (remember MySpace?) even though the guys technically weren't even a full band yet and didn't have a headlining show to their name. During this trip to L.A., Paper Tongues singer Aswan Noth spotted American Idol judge Randy Jackson dining at the Mondrian and approached him. He handed over his name and number and the band's MySpace URL on a piece of paper. Jackson called the charismatic frontman two hours later, and the rest is rock 'n' roll history. The band released its debut self-titled disc in March on A&M/Octone Records and have been touring behind it since.
Posted by xokayteamac at 11:15 AM