A rustic sounding folk rock band with as much talent as you can come by in this town, Campfire OK 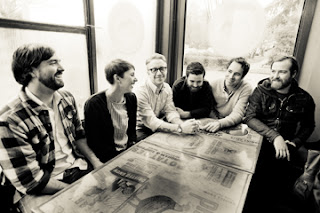 Listen Up! Campfire OK is 'Strange Like We Are' (& We Like It That Way)Seattlest Music has some new features afoot. One is called Listen Up! and you are about to read its first installment below. On a fairly regular (we hope) basis we will be bringing you a small sonic tasting from bands and artists that we love by streaming their singles straight from our posts. That way you don't have to scour the 'net attempting to hear samples of the fantastic bands we've been raving about both at shows and in our album/band reviews.


We're excited about this new venture along with its sister series Look Up! (of which the post below is sort of a mixture of both song and video) where we share videos that are particularly amazing whether they be live or artistic featuring those same fantastic bands. If there's someone you'd like to hear or see, then drop us a line at music@seattlest.com. We're always excited to hear from our readers and find out what you want to listen to. We're looking forward to this new direction and hope you are too.

photo by Kyle JohnsonIf you haven't noticed, the Seattle music scene has taken quite an upturn in the last year or two. As a matter of fact, you've probably noticed a huge upswing in amazing musicians. More than a little of that success is due to the tight-knit community that has always circulated through this town of ours. It's evident in the fans and the artists that grace the tiny and not-so-tiny venues spread throughout the town like so many stars in the sky. A really good example of the family-like atmosphere in music assembled itself in the form of Campfire OK.

A rustic sounding folk rock band with as much talent as you can come by in this town, Campfire OK includes standouts Mychael on lead vocals, Melodie on vocals and piano, and Bryan on vocals and guitar. It's rare that a group of musicians can walk into a restaurant one day and sound as amazing as if they'd gone into a studio and recorded a thought out and well-rounded song, but that's exactly what they did recently at Oddfellows. You can see it for yourself below in a masterfully recorded video by Christian Sorensen Hansen.


Campfire Ok at Oddfellows from Christian Sorensen Hansen on Vimeo.


Campfire Ok at Oddfellows from Christian Sorensen Hansen on Vimeo.

You would think by now that they would have a full-length recorded, edited and on the shelves with the practiced sound we have come to know and love. Alas, this is not true, or at least it wasn't true until this Friday today. They're having a cd release party at Columbia City Theater on Saturday to celebrate and we could not be more excited. You can hear a few songs from the upcoming album "Strange Like We Are" on their site or just click play below to get a little taste of what you've been missing. You'll wonder where this music has been all your life and wonder what you'd ever do without it. There's still a few tickets available for their show and we recommend you grab them now because it's sure to sell out.

Joining Campfire on Friday will be Koko & The Sweetmeats and one of its own members in solo form, Bryan John Appleby. We're anticipating a full-length from him about as much as we're dying to get our hands on the Campfire release. He has an amazing voice like rolling water flowing over rocks in a stream or wind blowing through tall grass on a spring day; sweet and refreshing with an occasional biting sorrow. Having heard him perform at The Collective's first Best of the New showcase and then again at Conor Byrne's open mic night, we're completely hooked. This video speaks for itself.


Cliffs Along The Sea from Christian Sorensen Hansen on Vimeo.


Cliffs Along The Sea by Brian John Appleby from Christian Sorensen Hansen on Vimeo.
Posted by xokayteamac at 11:41 AM