For any accomplished musician, leaving your established and respected full-time gig can be a tough decision. 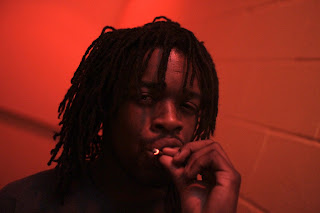 For any accomplished musician, leaving your established and respected full-time gig can be a tough decision. The transition becomes that much easier when there is a new project waiting in the wings. For Thomas Fridgen, former drummer for The Mars Volta, it’s clear that his new project, The Memorials isn’t just a project to occupy his spare time. The Memorials self-titled debut is a raw, propulsive listen that showcases not only Fridgen’s explosive power behind the drum kit but also his ability to inject life into anything he touches.

Based out of Berkeley, this intense three piece incorporates a variety of genres into The Memorials, a relentless listen held afloat by Fridgen’s steady yet surveying backbeat and Viveca Hawkins sassy vocals. At fourteen tracks and well over an hour long, The Memorials is the kind of disc that will keep listeners engaged well on throughout the night. Tracks like “Let’s Party” with its engaging stomp and the heavy, fist in the air crunch of “We Go To War,” solidify the band’s collective ethos: they are here for the long run, and are prepared to leave listeners with a fortified taste in their mouth.

There truly is something for fans of every “Hard” genre on The Memorials. The album speaks to the depth of talent within this three piece, from the sweaty, heavy punk drawl of “Enough” to the sprawl of the six and a half minute “Real.” The Memorials may be an especially long listen, with three tracks clocking in at over six minutes and only one under three minutes. But it’s unlikely that listeners will bore of The Memorials. Instead, it’s likely that they will become engaged in the plethora of sonic opportunities and come back for more whenever possible.
Posted by xokayteamac at 1:59 PM