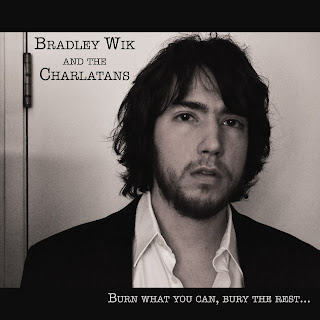 I admit that I know near to nothing about the alt-country movement and wasn't even sure if I should use a hyphen or a full stop in the sub-genre's abbreviated name.  My knowledge starts with John Doe and ends right at Drag The River.  Uncle Tupelo and Wilco have largely gone ignored by this writer due to personal taste defining most of it as just plain boring.

Both of my ears pricked up when I heard Bradley Wik and The Charlatans and it wasn't just because I thought the UK indie band had immigrated to the states.  There's an attention grabbing  gravelly raw country in the voice which melodically emotes "The Dark Lovely".  Just try listening to "66 Chevelle" without thinking of Springsteen, the Boss comes through in both Bradley's voice and the lyrics which resonate with fond remembrance of long gone younger days.
And many Night/s I’ve tried to go back to our younger days/
Listenin’ to the Stones in her daddy’s car/ Out on some Lost Highway
And we’d just pull that car off to the side of the road/
And we’d drink and we’d kiss and we’d talk about the future.

Bradley Wik represents the average working man from first hand knowledge in "Friday Night is for the Drinkers"  It's hard to fathom many who can't relate to the last lines even if it was many years ago:

"This Old House" and "I am Not Afraid" use the backing vocals of Brianne Kathleen effectively as the two voices interlock but it's still clear exactly who is the main player. There's a soul completely stripped naked in "Just Like John Fickes" demonstrating song-writing, which is capable of storytelling without getting lost in narrative and losing the song part.
I have been depriving myself if this is anything like what Uncle Tupelo and Wilco sound like and those punk bands I've heard who want to sound like Springsteen should listen to this and take notes.   Though I would suggest changing the name of the band  but that's only because I have prior knowledge of the UK indie rockers.  This album will strongly appeal to fans of Steve Earle and Bruce Springsteen plus a lot of alt.country fans.  See, I'm still not sure about the sub-genre's shortened form.

There's a sneak peak of the album on this site.
Posted by xokayteamac at 10:09 PM