The time-honored tradition of rhythmic pop 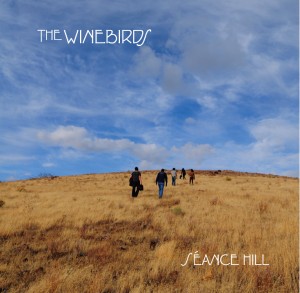 The time-honored tradition of rhythmic pop! The Winebirds are winding through much treaded territory on their new album, Seance Hill. This, however, isn’t a bad thing. We can forgive genre replicators if their hearts are in the right place, or if the music is good enough. In this case, The Winebirds make good enough music to make it worth your while.
The arrangement is simple; the band forms around a rhythmically strummed acoustic chord progression, time-keeping percussion, and nondescript bass. Their flare comes from the male/female harmonies, piano riffs, and synth/organ accents. The deciding factor in whether this album is listenable or not? The melody. It all falls directly on the melody’s head, which is always a slippery slope. For Seance Hill, some songs really work thanks to the melody and other songs are largely forgettable due to the lack of melody. The first five songs come out like gangbusters, using melodies that descend or have a slight hitch in them, which gives them the interesting angle this band needs. You all know how singing a line a different way can totally change a song, and on the first few here, all the little patterns they sing work. Then, as the melody gets bland, so does the music, and it all starts sounding like a hippie Americana band jamming out their “good time” but lackluster songs. When the music is backed against the wall like it is, where they get reduced to faceless progressions, it’s hard to maintain steam for an entire album.
“I Obscenity in My Mother’s Milk,” “The Solution,” and “Hit Machine” probably earn the honor of being the best songs, and they start the album in order. It’s not usually my favorite thing to have the best songs front-loaded, but then again, most albums fail to have multiple good songs, so I can’t come down on it too hard. The Winebirds aren’t trailblazing a new genre or anything very mind blowing, they just sunshine their way through an album and a few good songs pop out. It works, if not spectacularly.
Posted by xokayteamac at 7:53 PM