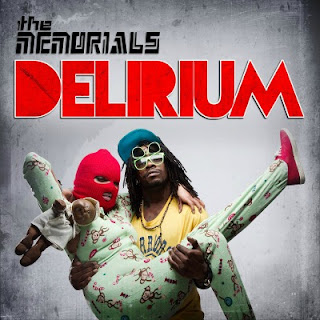 Just a year ago I reviewed the incredibly exciting debut album from The Memorials. The self-titled disc was a challenging first listen, full of complex arrangements and progressive approaches to what heavy music can sound like. It truly was a unique album, one that I would not have imagined would be easy to top. After just a year's time, The Memorials are set to release their sophomore disc, Delirium. I've been listening to an advance copy of it for a few weeks now and I must say...

...this album is even better than their first one. Fans of loud music and intricate song structures will find much to enjoy within its notes. The band explores elements of fusion and jazz even further than on their first outing and blend it so incredibly well with their heavy sound.

This is not an album you casually listen to. Don't put it on as background sound because you are doing yourself a disservice. Put on some headphones to enjoy the subtleties or play it loud through your sound system. Either way, don't just listen, but listen to it and you will begin to understand why The Memorials are as good as they are. As I did a track-by-track break down of their first album, it only makes sense to do it again. So on to track one, where right from the start, Thomas Pridgen throws convention right out the window.

"Dream (Future Perfekt Remix)" - You have to have all the confidence in the world and huge brass ones to open your sophomore disc with a remix of a song from your debut album. The Memorials pull it off in style with Mitchell Wilcox' Future Perfekt remix of "Dream". The track swerves across the EDM map from D+B to Dubstep but does so in excellent fashion. This is not a throwaway mix meant as B-side filler.

"Fluorescent's Unforgiving" - This song feels like it could have been the opener, but again, props to The Memorials for thinking outside the box. Viveca Hawkins goes from dropping lyrics like a pro to dishing out potent urban spoken word for good measure without missing a beat. The chorus is haunting and beautiful amidst the angst ridden message. A jazz trumpet at the bridge takes the piece in a wholly unique direction, followed by an acoustic guitar breakdown and Hawkins vocalizing in a Middle Eastern/Goa style, until the heavy riffs punch you in the face on the out.

"Gone" - A computerized percussion assault opens this one, quickly shifting to a live drum and funky wah pedal guitar attack held together with an all to underused organ line. It is a curious mix of 70's funk and hard rock. Nick Brewer is melting faces and strings with his relentless riffing throughout the song and Viveca Hawkins' vocals, especially in the chorus will remain stuck in your head right alongside it.

"Heavyweight" - Here is a slice of metallic jazz fusion you had no idea you wanted to hear. This one has a cleaner tone and trademark Viveca Hawkins multitracked vocals, which are just as key to The Memorials sound as the instruments themselves. Hawkins has a truly distinctive singing style, one that needs more ears to hear her.

"Daisies" - A love song positively dripping in 80s metal riffage. The melodic guitar open slams into a heavier version of itself backed by a syncopated rhythm. Hawkins rocks a great vocal against Thomas Pridgen's pounding drums and Nick Brewer's six string. On its surface, this one seems much more straight forward and less progressive, but listen specifically to Thomas Pridgen's masterful stick work to reveal what is driving this song.

"Delirium" - If by this point on the album you aren't convinced Thomas Pridgen is one of the best drummers currently active then obviously you weren't listening close enough. What starts as seemingly an in the pocket performance similar to the previous song, branches out with some wicked snake charmer riffing from Nick Brewer and a killer, drum powered breakdown at the bridge. Again, props to Thomas Pridgen for his subtle use of organ tones.

"So Anti Me" - With a heavy beat bordering on mosh inducing, Pridgen goes positively off the deep end, playing enough drums for three songs yet holding it all together and never drifting into drum noodling territory. Further use of an organ adds a nice extra tone to the track. The song downshifts into torch song jazz lounge mode and it totally works. This is another example of actively listening being a better experience. The piece further develops into just a throbbing bass line backing Hawkins as it pulses to a close.

"Mr. Entitled" - Running nearly 12 minutes, this is an epic way to close the album. Every note from The Memorials' play book is here: heavy riffage, masterful drumming, Hawkins in full effect and unexpected but deftly executed shifts into a jazzier space. A well placed flute accents the second section quite nicely. It runs back to heavy and then into a jazz realm again before an eye-popping synth bridge that I would love to hear more from The Memorials on album number three. Another furious, heavy assault and the piece ends on soft synths and a sax solo from Adrián Terrazas-González, who played with Pridgen in The Mars Volta. For an extended length song, it certainly does not feel overly long and the 12 minutes passes all too quickly.

Much like their debut album, I've enjoyed Delirium more with each successive spin, plus each song gets progressively better as you listen. So, for anyone who continually bemoans the "death of the album," I will counter with this.

If you are a fan of loud music, performed with artistry and passion but perhaps most importantly doesn't sound like anything else out there, get yourself a copy of The Memorials' Delirium to wrap your ears around. And if you have not yet experienced their first album, do yourself a favor and listen to both. Delirium drops on June 5th.
-rick
http://www.atlinernotes.com/2012/05/album-review-memorials-delirium.html
Posted by xokayteamac at 11:49 AM