Album Review: While You Were Out 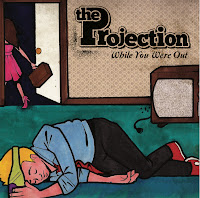 The Projection is a modern pop punk band hailing from .  While You Were Out is the band’s sophomore record and shows a band that knows how to write a hook.  From beginning to end, While You Were Out is a very catchy and poppy record played with precision and sung with slightly nasally vocals.  The album’s lead single “Trying to Forget” is a perfect example of what to expect from the record—fun and bouncy songs about love and loss.  The Projection’s brand of pop punk is more inline with the like of The All-American Rejects and Blink-182 than say The Methadones or ALL, but there’s nothing wrong with that.  In fact, given the right situation, I could see plenty of these songs becoming huge hits.

Thanks to !upstarter Punk Reviews for the find.
Posted by Dave at 7:28 AM