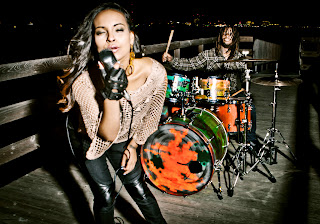 Founded in 2009 by drummer Thomas Pridgen after a stint with the Mars Volta, the Memorials features a trio of former Berklee College of Music students. Pridgen is joined by Nick Brewer on guitar and Viveca Hawkins as a vocalist. Their first album, self-titled “The Memorials”, was released in 2011, and brought in enough fans to warrant a tour. Their second album, “Delirium” is due for release in June.

While self-proclaimed as hard rock, “Delirium” borrows elements from multiple genres. At times the guitars sound fuzzy, and there’s enough distortion on Viveca’s voice to be reminiscent of dream pop or shoegaze music. “Daisies” and the title track “Delirium” are great examples of this. Although mellow guitars with slightly subdued vocals are characteristic of shoegaze, the Memorials bring a faster pace than you’d expect to those songs. With “Fluorescent’s Unforgiving,” the tone becomes rougher, more metal and punk, pulling on the echoing stadium rock sound. Despite Pridgen’s experience, the rest of the band’s versatility is unexpected, but welcome.

The Memorials have some work to do on their execution of different sounds. Standard rock is clearly their strong suit, but the more experimental they get, the more each song sounds unintentionally rough. “Fluorescent’s Unforgiving” is the best example of this; while obviously intended to clash with itself, it happens too much. The vocals are grating, and for some reason a lone jazz trumpet appears halfway through and completely throws the song off.

That’s just a single song though, and it’s better just to ignore it in favor of the similar, but better “Mr. Entitled.” The stadium sound is there; the vocals are clearer and much less repetitive. The song even ends similarly, tailing off into lighter, prog rock tones. Because of this genre spanning, the Memorials aren’t a band you need to try and like — it comes naturally.

FOR FANS OF: We Were Promised Jetpacks, Silversun Pickups, The Airborne Toxic Event

Email ThisBlogThis!Share to TwitterShare to FacebookShare to Pinterest
Labels: Silversun Pickups, The Airborne Toxic Event, We Were Promised Jetpacks