The Burning Hotels Novels on The 1st Five 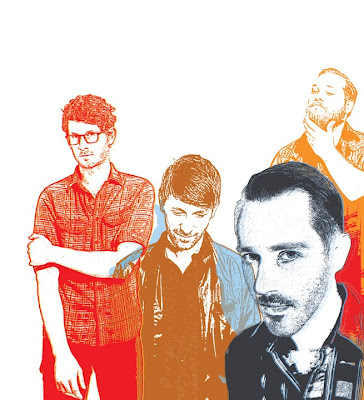 The cynic in me wanted to trash The Burning Hotels has a talented, but
merely serviceable, group about five years too late to cash in on The
Strokes success. All the signs are there to see. Simple foundations of
clustered guitar chords, crooning vocals, augmented by metronomic drumming:
a NME or Spin magazine wet dream, and a career that's equally as fleeting.
Only those signs are pretty much bullshit, traces of lazy writing and lazy
listening. Both of which I was initially guilty of while listening to
Novels. Until, somewhere around the fourth listen, it clicked. For all the
glitz of its perfect sound and tight structure Novels is indie rock for
Built to Spill or Get Up Kids fans who want, in their secret heart of
hearts, just once to hear their favorite band write a big pop record.

Now yes, both of those bands have written poppy songs, and lots of post-punk
influenced indie rock bands have signed to major labels in hopes of making a
big record. I'm not talking about that. Instead I want you to picture your
favorite artist getting fed up with trying to rip your soul out of your
chest with his words, picking up their guitar and using all their influences
to write a furious pop record. A pure pop record that isn't dumbed down, but
instead focuses underground sounds into short compact bites of melody.

Calling a band utilitarian is often considered an insult, but its original
meaning is roughly "the greatest good for the greatest number of people."
Selflessness isn't something we praise much in musicians. We moan about how
deep they are when they tell us our enjoyment of their music doesn't matter
to them, because writing songs only for your self is somehow more pure.
Novels is a exercise in utilitarian songwriting, in the classic sense.
Eleven songs with a easy to swallow pop coating that cleverly hides a
decidedly more complex core.

So while the sweet crooning might get your heart sighing your ears will hear
a stunning display of subtle technicality from drummer Wyatt Adams introduce
you to math rock rhythms. "Where's My Girl" rides a wave of reverberating
guitar swells that would give a Failure fan joyful pause, but without
alienating The Killers' groupies with a bloated run time padded with lots of
solos. The constant balance between The Burning Hotel's knack for pop melody
and their technical chops gives them a feeling of freedom I wish I saw in
more bands. Less concern for what they're supposed to do, more passion for
what they want to do.

Of course this is all just conjecture. Maybe they were just trying to write
a really good Killers album and just happened to produce such a compelling
take on the genre. Post-punk that remembers its roots, while forgetting all
the scene politics that said pop songs weren't allowed. Novels isn't quite a
classic, but it leaves plenty of reasons to anticipate The Burning Hotels'
next release. Not to mention keeping a close eye on their future plans.
Posted by xokayteamac at 3:24 PM