Romeo Spike "For the Cause" review - Imagine Echoes 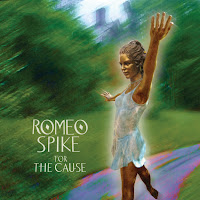 When I read a description of Romeo Spike, they were termed as sounding like "futuristic classic rock." So after hearing that, I thought to myself, "What does futuristic classic rock sound like?" My first impression was it would sound like Pink Floyd or Yes. After a few listens of For the Cause, I came to the conclusion that nothing released now can be coined "classic rock" or "sounds like classic rock." Classic rock isn’t a genre, it’s an era that encompasses such a broad array of bands that to say something sounds like classic rock would be like saying something sounds like...well... sound. So then what does Romeo Spike sound like? At times they sound like a tamed version of The Flaming Lips with the quirkiness taken out and during other moments - sound like Pink Floyd, with a clear and heavy influence from David Gilmour’s guitar work. Ultimately, all of this adds up to a fine album with plenty of space rock qualities.

The space rock qualities are most evident on the opening track "Spaceman", an upbeat song filled with atmospheric effects and a dominant rhythm. The opening track is the albums plateau in terms of tempo, but while the mood may become more subdued, the quality of music never ceases. The remainder of the album will have you drifting away with their melodic and dreamy attributes. "Cocaine Skinny" features a soothing slide guitar that creates a lulling backdrop, sounding very much like Floyd. The following track, "Candy Heart", continues with the David Gilmour-esque guitar work with a solo that could certainly be confused with one of his solo’s from his latest solo album On an Island. The final song on For the Cause, "Yesterday’s News" is an incredible melodramatic minimalist piece with the vocals taking full command and like a puppeteer, Romeo Spike has their listeners under their complete control.

Romeo Spike has created a very authentic spacey album with enough atmospheric backdrops to take you as far away from earth as possible. The album is almost like a space ship, it blasts off with the energizing "Spaceman" and then drifts away into a calm tranquility that can only be described as fantastic.

Grade: B+
Posted by STARBIRD BOOKING at 2:11 PM