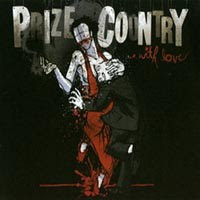 Prize Country receive a number of Snapcase comparisons, but they're totally warranted, in a really weird way. ...With Love isn't really a hardcore record, but like End Transmission, it's relatively expansive with a strangely intense tilt about it.

Vocalist/guitarist Aaron Blanchard has a sharp, punchy, punctual voice, but it's not quite as high-pitched or jarring as Daryl Taberski's, instead cutting in and out of jagged, pull-and-push guitars more out of Fugazi's playbook. This works best in "Regular Nights," a pretty lyrically sultry song for this style of post-hardcore, but a catchy one at that, while "Bigger Picture" has a great, winding groove and "Cement" makes the best use of power chords, a carefully poppier slant and handclaps one imagines it could.

The dynamics here aren't quite fully realized and much of the record does blend into each other a bit. That being said, this is a pretty cool album that's worth a listen or few.