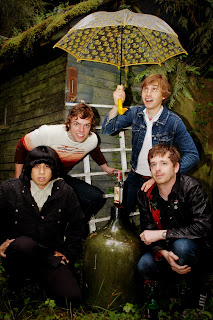 Welcome Home Walker plays music and space checkers! They are set to perform at The Earl

Grab your dancing shoes, bikes, skates, Marta card or anything other than a gas-guzzling, eco-meanie car down to the East Atlanta village for the East Atlanta Strut! It's gonna be a long day... and night.

Starting at 11 a.m., the East Atlanta Strut will celebrate its 15th year of bringing walkers and festival-goers together for the purpose of raising funds the neighborhood. A pot full of art and food vendors will be here cooking up all types of goodies to satisfy anybody willing to have a good time. Also, 99X will take over the main stage with bands like The DOLLDAZE, Holliday Brothers, East Ponce Soul Faction and many more! Not to mention there will be a battle of the marching bands that no one would want to miss.

But, that's not the reason you want to go to East Atlanta Strut. No, people attend it for the festivities that follow!

Rock N' Roll Kills is breaking out The Booze.... and a few other killer bands.

The Earl is going to be jam packed with East Atlanta Strut lingerers playing music to bring out your inner-inner strut. Bands like The Booze, The Biters and Welcome Home Walker will be hitting the stage bringing their talents with them.

The Booze is a band that is nothing like their name. Why? Because they are nothing to drink through! Hailing from Atlanta, this band carries a tune straight out of the 60s and bring it into, well, 2010. It's not a pop, Beatlemania-type of sound they have, but a sound that is totally vintage rock.

Opening for The Booze is The Biters. Vintage rock in nature, this band is as grand as their predecessor, Cheap Trick. Their set is sure to keep The Earl crowd entertained and ready for the headliners. The other opener, Welcome Home Walker, is the only band not from the Atl. Hailing from Portland, Oregon, this band provides a little humor to their 60s-sounding swagger. Aside from their garage band, old school rock kind of sound, Welcome Home Walker also adds a pinch of R&B/gospel to their repertoire.
Posted by xokayteamac at 11:28 AM