No one has rated this album. You can be the first. Prize Country - With Love 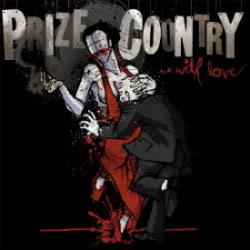 No one has rated this album. You can be the first. Prize Country - With Love

Record Label: Hex Records
It isn't hard to be a popular heavy band these days. If you went to the Warped Tour this year, you would've seen newer acts like Bring Me The Horizon and Attack Attack draw bigger crowds than respected Warped mainstays like Alkaline Trio, Reel Big Fish and Face to Face combined. Just bring the 808 triggered breakdowns, drop A tuned guitars and good looks. So what do you do if you're a band like Portland, Oregon's Prize Country that recently released With Love, an exercise of intelligent post-hardcore that's hard to come by these days since Pretty Girls Make Graves put down their guitars for keyboards.

What Prize Country does on With Love is utilize the heavier aspects of Northwest legends These Arms Are Snakes, the vocal stylings of Snapcase (aka no singing, just throat shredding yells) that are blended with guitars that sound like if Drive Like Jehu and Botch had a lovechild. This mixture of influences make Prize Country one of the more unique heavy bands out there today because how much they're not like the aforementioned metal/hardcore Warped Tour darlings.

Lyrically, Prize Country isn't inspiring nor clever, just merely focusing on the dirty and lustful side of relationships, like the sexual romps of "What We're Made Of" ("Lie down and slide in/Fill the space between") and "Regular Nights" ("Your eyes like a bedroom of lies/So many secrets in your thighs"). As blunt as their subject matter is, it's as blunt as their songs. Turn up "Gamble" as loud as you can and try not to air drum along to Joshua Northcutt's tasteful yet aggressive drumming as singer/guitarist Aaron Blanchett yells "suck down" repeatedly. It's the album's catchiest moment, if such statement could be made about their music.

The record's best song is the closer "With Love", which has the thing that the rest of the record is lacking: melody. During the verses, the ethereal "ooohs" give the song the emotional punch that the rest of the record is lacking. Not to say that the lack of vulnerability is a bad thing, it's plain to see these guys just want to tear faces off, it's that Prize Country, with the minuscule beauty that they display in "With Love", satisfies any longing for an sentimental moment in their music. It's a contrast that Prize Country could use more of.

With Love's only issue is that the songs do blend together into one big song but fortunately, it's one awesome, brutal song. If you miss the creative yet aggressive guitar work of older Pacific Northwest bands like Pretty Girls Make Graves and Botch, the grooves of Quicksand or Helmet, or want to graduate into more interesting territory other auto-tuned hardcore, Prize Country could just be the gateway band to bigger and better heavy music.

Recommended If You LikeMid 90's post-hardcore; Drive Like Jehu; Snapcase - Designs for Automation
Posted by xokayteamac at 11:36 AM