The Memorials - We Don't Need No Education 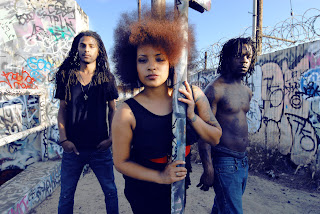 We Don't Need No Education

Since “Is college really worth it?” think-pieces are so de rigueur, let's take a stab at the human-interest angle here. Thomas Pridgen, drummer for the Berkley, CA-based rock trio The Memorials, can lay it all out for us: “It's a business to go to school,” he says, speaking to Flagpole while on tour in Detroit. “The education [system]—they're trying to make money.”

Years ago, Pridgen was across the nation from his hometown at Boston's Berklee College of Music, where he'd been that school's youngest-ever recipient of a scholarship at the age of 15. He decided against finishing his degree because opportunity was already knocking: after playing with various California gospel artists and on the strength of a single audition, he put in several years on the drum throne with The Mars Volta on several tours and records. Beyond that, he's done extensive session work with rock artists such as Juliette Lewis and Foxy Shazam, rap groups like Blackalicious, Slum Village and many others.

“That was part of why I dropped out; I also dropped out because it was starting to cost me money. I didn't want to start paying to go there because I was auditioning teachers. The drum teachers would go, 'Come in here,' and we'd basically be picking the next drum teachers. So, I don't know… I think Berklee was great because I met amazing people, but I don't think it was helping with what I'm doing now.”

Two such people he'd studied with at Berklee would later become close collaborators. In 2009, Pridgen left The Mars Volta to form The Memorials alongside vocalist Viveca Hawkins and guitarist Nick Brewer—both Berklee attendees. While session work could easily be a road to comfort for any of these extremely talented musicians, all three seem far more content on the touring circuit than at school or working on other people's music. Having released its first self-titled record earlier this year, the band is touring steadily this spring and already plotting the next album. “I feel like our sound is becoming more solid; with that first record, we were experimenting,” says Hawkins. “Now we're just kind of deciding what we like the best—becoming more mature with our sound.”

With such a diverse history in session work, it makes sense that Pridgen's band would be as eclectic as The Memorials are, combining elements of Tool's moody gloom, Faith No More's knotty, hard funk rock and even some of The Mars Volta's polyrhythmic intensity.

Hitting the road running doesn't lack for pitfalls, says Brewer: “Right now, clubs don't promote, so if you have one night that's amazing, and you have 400–500 people there, and then you can have a night where there'll be 20 people there. And that 20-person night sucks if you don't make any money. That's how we put gas in our tank; it's by selling merch.”

And then there are the obligatory zany club situations, such as the sound guy freakout they experienced in—where else?—Las Vegas. “He said we called him a honky,” laughs Hawkins. “Who says 'honky?' Like, who has ever heard anyone call anyone a honky in the last 20 years?” They shrug off the thought that, as an all-black band, racism is anything to seriously contend with. “I mean, I'm black, so I experience racism if I'm going to Wal-mart,” says Brewer. “I don't dwell on that type of shit; it's normal.”