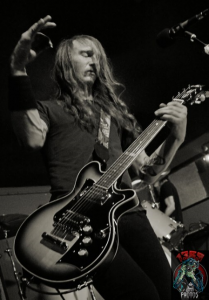 When I first saw them, I was reminded of those stories about alien abductions. I felt like their so-called “instruments” and “voices” were in disguise; like they were actually getting into my thoughts, using the reverberation of sound waves, i.e. music, as a technique to capture and convey messages. Obviously it wasn’t scary or painful, but it was somewhat anxiety producing, although in the most comforting way. They’re futuristic, they’re enlightened, and they’re loud. They are White Orange.

I forgot to ask them, so I’ve been trying to figure out exactly why they named their band White Orange. As abstract as that sounds, it’s just what they sound like. 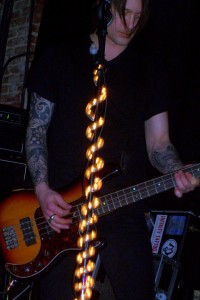 Maybe it can be said that they are neo-grunge. Or are they post psychedelic-punk? I refrain from saying experimental or artsy, in hopes that ALL artists out there are experimenting as they should be. Perhaps I could say that they’re trance rock. Either way, I’m making it up – or maybe I should just admit the fact that I’m stumped. Various bands come to mind, but none are really close… those would be: At the Drive In, Nirvana, Deep Purple, Mudhoney, and Sonic Youth. Doesn’t make sense, right? Told ya! Whichever way you describe them, my confusion about who to compare them to should convey something about this band to you.

And so it happened, I was confused. Truth be told, I was starting to think my head was going to explode. Indeed, they are loud… but they would be just as loud with small practice amps, or soft-acoustic guitars. It wasn’t just the volume, but their unique tone and the physics of it all that got to me.

I really do think they’re aliens. Their performance was so unworldly that I felt transported away from my physical surroundings – abducted, if you will. But like I said before, I wasn’t scared. It was healing, it was cathartic, it was trance inducing, and it was arousing. (Yeah, I later discovered that White Orange’s exclusive press CD provides excellent ambience for one of my favorite past times – which, according to Paul – would be quite apropos for aliens!) 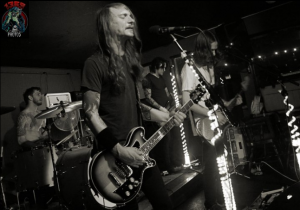 Rule-breaking chord patterns and dirty n’ loud fuzz give them a grunge basis. They also have a very signature type of progression in their writing: it’s patiently repetitive, but there’s a gradual build and thus (and I love this), every measure is slightly different than the prior, consecutively speaking… hence, there’s a definite edge of trance. The trip itself is absolutely psychedelic. This band emphasizes surrealism.

The musicians in White Orange are tone freaks, and so… in consistency with their progressive nature… they maintain a large arsenal of “trippy” tones and effects at their disposal: wah, flange, phaser, fuzz box, od, I don’t even know… it’s confusing.

Dean’s contribution to percussion is very dynamic and solid…. with a constant “punch through”. Adam’s bass lines are twisty and bendy… creating somewhat of a helix in the waves of Dustin’s rhythm work. All the while, Ryan creates the finesse in their sound with piercing, warped, and cutting leads that leave the audience in a daze; even in their simplicity. Simple, yet profound.

Dustin’s voice is about as signature as everything else in White Orange – industrial, raunchy, and other-worldly.

However the heck you try to describe them, this quartet of extra-terrestrials are evolving a new sound that gracefully (and loudly) expresses our awe of grandeur – like staring at the sun. They flow upstream, overhead, second star to the right, and straight on till morning; radiating a very certain color as they go.
Posted by xokayteamac at 3:44 PM