The Deal: Former Mars Volta drummer Thomas Pridgen returns to the scene with his new band, The Memorials.

The Good: First of all, I don’t know the entire story. I only know that Pridgen was the drummer for the Mars Volta when they played at the Fillmore, and that Pridgen left the show in a taxi, having played his last gig with the band. Regardless of any of that, Pridgen has launched a new rock quintet called The Memorials, featuring two friends from the Berklee College of Music — Nick Brewer and Viveca Hawkins, bringing him back to the N.C. Music Factory. 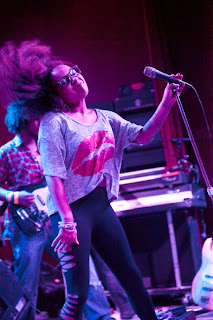 The band took the stage around 11 p.m. on its way to a nine-song, hour-long set that showcased not only Pridgen’s drum skills, but plenty of other talent as well.

Singer Hawkins has plenty of stage presence to go around, finding time to shake her head, dance to the beat or just engage the audience and draw them in. Her vocals found a balance between rock and soul. 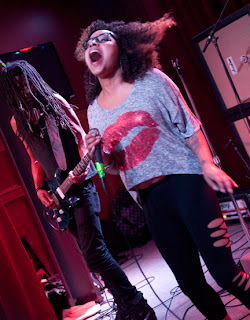 Guitarist Brewer not only knew when to hold back or step out of the way to let Pridgen shine, but also knew when to unleash everything he had in a fury or neck-breaking finger-work. 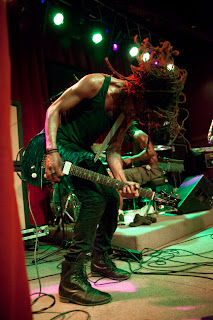 It was Pridgen’s drum work that took a good bit of the spotlight. He needs strong players like Brewer and Hawkins to balance things out, but he hammers away with ease and power, defining the rhythm of each song. While some might have more of a salsa beat behind the rock and others are built on pure drum riffs, it’s not just a drummer’s “jerk off” session. There’s definitely a method to his madness. 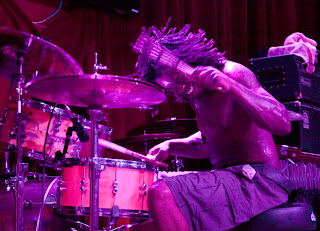 Pridgen performed the set with his drumkit facing backwards and didn’t look back at the crowd often, but there was usually a smile on his face when he did.

The band played a number of songs from its self-titled debut mixed with a few others, but the small crowd soaked up every minute.

The Bad: That I missed the opener, Lucky Five, but I was across town here.

The Verdict: A strong rock band that’s fueled by drums without being overpowering. A bigger crowd would have been nice, but I’m sure word will spread quickly if/when they return.