Stephanie Schneiderman - Love songs and anti-love songs from the lady and the laptop. 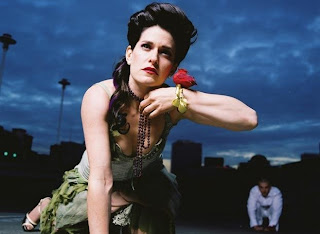 IMAGE: http://www.stephanieschneiderman.com/
Tags: [ELECTRONIC POP] Back in those heady days of the late ’90s, the electronic-music landscape was rife with groups that put a dulcet-voiced female at center stage while behind her, a gent or two turned knobs and cued up mid-tempo, bass-heavy rhythms on their laptops. It was music that fit nicely into motion-picture seduction scenes or soundtracked a cocktail bar.

It’s been a surprisingly resilient sound and setup, considering the number of acts and producers that are still taking this tack today (Zero 7, Morcheeba, etc.), including one of the more recent adoptees of this creative approach, Portland singer/songwriter Stephanie Schneiderman.

Schneiderman, also a member of the folk/pop trio Dirty Martini, was approached in 2007 by Keith Schreiner, a DJ/producer who helped initiate Portland into the world of electro-pop with his former band Dahlia.

“It was the right time,” says Schneiderman, between sips of green tea at Townshend’s Tea Company on Northeast Alberta Street, “because I had a whole batch of songs I knew I wanted to do, but I wanted to try something completely different. We had a one-day session in the studio and it was one of those magical days where everything he touched turned to gold.”

That collaboration yielded an impressive 2008 LP called Dangerous Fruit, which amped up the heat in Schneiderman’s sultry vocals with supple beats and skeins of gorgeous ambient electronics.

Inspired and emboldened by their work together, Schneiderman turned to Schreiner a second time, and the results are even stronger than before.

RATE On Rubber Teardrop, you can hear the two settled into their mutual roles as artist and muse, both aware of and working with each other’s strengths to create an intimate and sexy LP that demands repeat listens just to catch up with every noise and lyric that drifts through it.
“I was pushed to take more risks,” says Schneiderman. “It took me a while to embrace it, but when I did I was able to write with the studio and Keith in mind. The further I went, I was more open to that world and the broadband of sounds and textures Keith would have.”
For such a personal-sounding work, it was supported in the most public of means. The sessions, mixing and mastering were all funded via a Kickstarter campaign. “We asked for $7,200, which is really a lot less than we needed,” Schneiderman remembers. “But we hit our goal and then some in 48 hours.” The intimacy of the music will be emphasized in the rewards for nine lucky backers who plunked down $1,000 or more for a private performance by the singer-songwriter in their homes.
But like many a musician, it is that push-pull with putting personal matters (many songs on Rubber Teardrop feel directed at a spurned lover) out into the world for public consumption that makes Schneiderman’s work—both on her own and with Dirty Martini—so exciting.
“Part of me feels resistant to that,” she says of putting her private life into her work. “But it should be a challenge. You have to give it a shot.”
--------------------------------------------------------------------------------
SEE IT: Stephanie Schneiderman plays the Alberta Rose Theatre on Friday, May 6. 8:30 pm. $15. All ages (minors must be accompanied by parent or guardian.)
Posted by xokayteamac at 11:34 AM