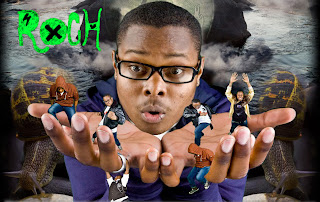 In hip hop today, to make a solo album that’s consistently awesome requires something special. You have to be an amazingly talented producer (RJD2), a soulful vocal virtuoso (Cee-Lo), or one damn fine lyricist (Jay-Z). Roch’s first solo effort has some pretty solid beats produced by some talented musicians, and the rest is up to him. Both the singing and rhyming on this record, while showing great versatility, may have stretched this artist too thin. The songs are generally dark with trip-hoppy, almost NIN-esque beats and heavy, deep synth and gritty, soulful crooning. I found myself wishing for more raps rather than more singing, though. When he really flows like on “Hard Times” and “On Everything Lude,” Roch nails it with nice rhythms and some great punchlines. Some, like “A Beautiful Curse,” even had me almost humming along. But overall, the singing and heavy bass cause this record to blend together. All the choruses seem to have similar melodies and I’d like to see him branch out. While the whole album did grow on me, nothing ended up addictively listenable. –Rio Connelly
http://www.slugmag.com/article.php?id=2800&page=11
Posted by xokayteamac at 11:02 AM