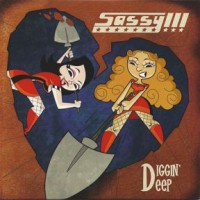 Two piece bands tend to be a hit and miss affair with more misses than hits.
As well know from the wellworn dog-eared book of cliches, the cream always
rises to the top but then again so does pond scum. In terms of garage punk
bands this opens a debate of the merits of cream versus those of pond scum.

Sassy!!! are a two-piece band made of two girls, Lynda Mandolin (who was of
Fat Wreck Chords band, Fabulous Disaster) and Christian Diabiase. The band
mine further back than just the punk era using sixties sugar-coated pop girl
group harmonies on "So Bad It's Good" and "It Really Hurts". It's not all
sweetness and light though as witnessed by the large rowdy drumbeats duking
it out with the distortion over the ever-present sweet vocals in "Devil's
Dance".


To use another cliche, the band's minimalism brings their strongest
qualities to the fore. The strong poppy yet punchy harmonies in tunes like
"Something About You". Irresistible hammering drums that are often at the
forefront of the mix.

There's an equal measure of pond scum punk attitude in the instumentation
and the sweetness of cream in the harmonies so I'll leave the rising to the
top debate to others. The sticker on the CD compares the bands to the Muffs,
The Kills and The Gossip. I can't comment on the others but the Muffs
comparison rings true. The only weakness is the lyrics which are typical
rock relationship fare. Sassy!!! kick a whole lot of attitude and unlike the
cover of their CD are definitely not two dimensional.