Almost like an indie prog rock version of slipknot...... 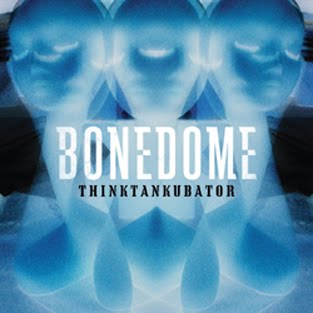 Almost like an indie prog rock version of slipknot, the many members of Bonedome blast competition in their genre out of the water. You could argue with that many musicians at once it has the potential to become a mash of noise but not this, this is anything but.
Thinktankubator is an album with a serious personality disorder, it makes you want to laugh and cry with the change of a song.
Every new listen of the album envelops you into deeper and deeper layers of intricate sound, subtleties you had previously missed become clear and delicate murmurs that seemed to escape you will suddenly present themselves on the forth or even fifth time around. There’s a complicated quality to the songs, it’s only on the second or third time of listening that you really hear them. There’s a subtle bitterness there, a cleverly displayed darkness, lyrics that seem to expose all the hate of the world but are served with a smile, rather like a poisoned apple; take a bite of that apple and you realise the insides aren’t so nice. They have a somewhat smooth, lovely surface and a dark underbelly that once you're involved will shock you.
The music is something else; trying to say who they sound like is hard because, the more you listen the more bands come to mind. The best way to describe them would be if David Bowie, Nirvana, Nine Inch Nails, Kings of Leon, Gary Numan, The Beatles, Pink Floyd and The Who got together and had the best jam session in the world, then wrote an album based on that jam session, whilst taking influence from all the best times they’ve had alongside all the times spent in the gutter. Yeah, I know, I listened to it countless times now and I cant dissect it anymore than that. It’s simply way to complex and captivating to pull apart, with the various members weaving elaborate guitars and sumptuous vocal harmonies alongside drums, percussion, and keyboards. It is too detailed to take to pieces and would be like trying to find a single threads journey through a tapestry, it just can’t be done.
Thinktankubator is an album with a serious personality disorder, it makes you want to laugh and cry with each change of a song. Some of the tracks seem to be more upbeat and more fun in the way of lyrical content. For example, the lyrics of “Girl One” really make me smile “Girl eleven only lives in my head, (she is my headcase) / Girl number twelve lives only in porn". Also the opening line of “Slow Jesus Xing” is awesome: “He ain’t heavy / he’s fat and American but the girls still love him.” But they are in stark contrast to the darker lyrics of “Easy”: “No lullaby can stop me / down will come baby / her lover and all, and into the cradle we all will fall / it’s easy to kill a man, easy from where I stand.”

And the heart wrenching lyrics of “Custody Lullaby”, simply put, is despondent words wrapped in an elegant blanket of soft musical genius. It just makes you want to sob. It’s like a rose, graceful and painful. It’s so simple, so clever and is almost what’s left unsaid that makes it. The implications, as well as the in your face message makes for a haunting track disguised as something cute. “You didn’t exactly get to choose / your momma, your daddy, or who to lose / you didn’t exactly get your say / what baggage you’ll carry for the rest of your days”

In essence, Thinktankubator is someone’s feelings bottled and sold to the masses.Pparts of it are so dark you’re almost emotionally tired after listening to it, but despite that fact it’s still exceptionally poetic and sublime; it’s like being confronted by a psychopath with a pretty face, and it doesn't really get any better than that. Thinktankubator has this phenomenal epic musical intelligence and, for a band to be able to so seamlessly get to such levels of darkness whilst their product is so beautifully put it together, just makes you wonder how you ever existed without it in your music collection before. Thinktankubator is already in with the music I listen to regularly and I don’t see that changing ever.
Posted by xokayteamac at 12:11 PM