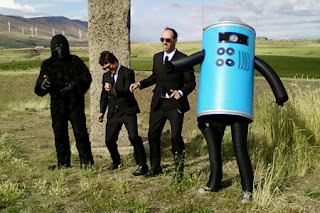 In recent years, it’s been rare that October begins with Red Sox fans in mourning. But such is the case in 2010: On Tuesday night, the last flicker of hope went out for the team this season as it was officially eliminated from playoff contention. As a condolence for the team’s injurious year, here’s a previously unreleased cover of the song that is played at Fenway Park when they win.
This rendition of the Standells’ “Dirty Water” is by Blue Skies for Black Hearts, a classic-rock-sounding indie band based in a city far from Boston: Portland, Oregon. Here it is:
• Bad Penny exclusive download: Blue Skies for Black Hearts’ “Dirty Water” cover
In addition to bestowing the Bad Penny with the studio outtake, vocalist/guitarist Pat Kearns passed along a few words about it:
“This is an unreleased studio outtake that will not be included on our next record, Embracing the Modern Age.
“Written by Ed Cobb and originally performed by the Standells, we started doing this song a couple of years ago when we were asked to do a Nuggets Tribute night. The song appeared on the first Nuggets LP compiled by Lenny Kaye and Jac Holzman. We were fascinated by the simplicity and the groove of the song … and amazed that you can play a drum fill on the high hat (see the last break before the outro).
“After recording gang vocals for our song ‘Majoring in the Arts,’ we had so much fun with all the dudes that we didn’t want to stop. Someone suggested doing ‘Dirty Water’ too. … It couldn’t have turned out better. Everyone knows the song and there aren’t a lot of notes in it which makes it very easy to sing. I think all those dudes really add to the feel.”
If you’re feeling Blue Skies, go here for another free download, this one an MP3 of their song “Embracing the Modern Age.”
Posted by xokayteamac at 12:08 PM