DIY certainly isn't gimmickry or anything, but making your own instruments? 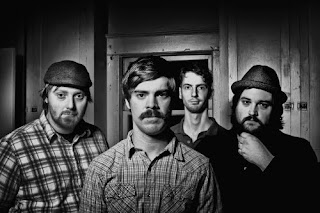 DIY certainly isn't gimmickry or anything, but making your own instruments? What? Microtia broach that borderline. The packaging for their new-ish album, Spacemaker, comes from used beer boxes (mine came from a Coors Light can pack) for the sleeve and cigarette packs (Camel) for the little track listing liner note. Pretty cool. But a four-piece "rock" act making their own instruments? Shit's weird. I don't even know how they go about that. Luckily, it doesn't matter, because as far as you can with synth-y, '90s post-punk/hardcore, Spacemaker "rocks."

There are times when Microtia resemble a noisier Jawbox, or a less D.C.-ish Hoover. But there's something far more "melodic rock" than those comparisons seem to insinuate, and it's hard to really stress that enough. Maybe more of a heavier Dear Hunter-type thing in "Add Insult to Injury"? There are the keys. after all. And Microtia singer/guitarist Eric Leskovar provides a stable enough, slightly nasal overlay for the band's fussy but controlled style.

"1000% Sure" approaches that contrast sharply, with buoyant, stacked vocal harmonies and drumming that's either a little bit sloppy or just syncopated. The complicated instrumentation weaving and melodic choruses actually sound oddly like those of that last Scarlet record, 2006's This Was Always Meant to Fall Apart, if that makes any sense--notably in "I'll Fight Harpsichord." By that point, though, it also seems the band is starting to repeat tricks a little and it does dull the record's momentum a bit.

It feels a bit formulaic and like such is wearing thin by that last third, but Spacemaker manages to finish humbly enough. Microtia have crafted a near-thorough DIY effort to its core and cranked out an interesting and unique style in the process.