Okay, seriously, this chick is way too cool for us. 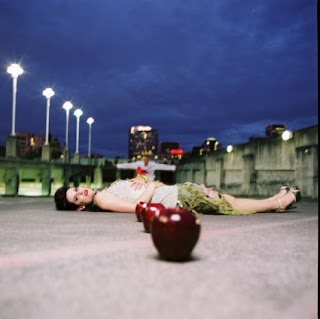 www.NewBandDaily.com
Okay, seriously, this chick is way too cool for us.  She plays trip hop, electronica and ambient music, AND is from Portland, Oregon? We're almost sure nobody else up in the Pacific Northwest is doing what she's doing (or at least sounding as good).
She's released six solo albums, won a spot at Lilith Fair in 1999, and collaborated on many films and international projects, including staging a concert to benefit refugees in Uganda. So basically, she's an indie superstar.
Her voice is ephemeral, throaty and cool, and her manipulation of electronic sounds with a clear folk, trip hop, and pop influence is pleasing to the ears. Her music would be perfect for film soundtracks. She reminds us of a less eccentric Imogen Heap, and we like it - a lot.
Songs we recommend you listen to: "Wide Open" and "Oxygen."
Click here to visit this artist’s website.
Posted by xokayteamac at 12:21 PM