California's The Memorials self-titled debut album is a rowdy 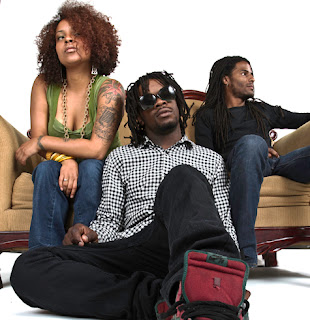 http://www.nocturnalcult.com/newcontents.htm
California's The Memorials self-titled debut album is a rowdy, yet soulful metallic party.  Punk and thrash riffs are mashed up against a relaxed middle section on We Go To War.  The effect is a free-for-all melee surrounding the eye of the storm.  A bouncing bass-line has my feet tapping as Natural Disaster begins, and wailing organ synth accompanies this nicely.  Viveca's vocals bring to mind a more aggressive, edgier Garrison Starr as they sway in a despairing yet sultry way.  The song gains momentum and unleashes an avalanche of bass and roiling drums.  A lazy, dreamy playfulness drips from the hazy Bjork-ish voice on Day Dreamer as the drums and dissonant guitars at times bring to mind Voivod.  I know it sounds odd, but I hear it buried in there.  And then the album drifts off course with the silly party song, Let's Party.  It's as if an MTV beach band stumbled into a barroom rock jam.  And to continue the downward spiral, the funky swirl of Westcoast fails to grab me at all, sounding flat and a little forced.  The band regain their footing on the punked-up new wave jam, Dream, which incidentally is my favorite track on the album.  Viveca's voice drips sorrow and honey all in one.  Thrash riffs and powerful drums drop into menacing restraint on GTFOMF.  And here we go again, drifting off course with Real, a toughened up take on classic soul-pop, the kind of hit the Pointer sisters might have hit you with in the 80s if they were utilizing metal guitars.  Insane blast beats and guitars sizzle with electricity hiss as Why Me? rears its paranoid head.  The track undulates with a psychotic rhythm as it settles in.  Sunny pop-punk crossed with Weezer on the track I Remember You leaves me feeling light and a bit refreshed.  The Each track, and by proxy the album as a whole is just slightly too long, leaving me a little worn down by the time we cross the finish line.  Plus the disparate styles creates an album that loses focus for me.  Some of the material on this album is great and others seem out of place or in a way, forced.
Posted by xokayteamac at 10:36 PM