BLACK PUSSY : They nail it, whatever it is 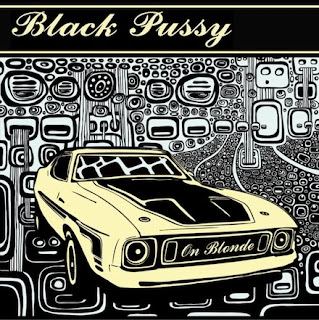 Right from the outset you get of some sense of what’s in store from Black Pussy with the psychedelic cover art and the boss car graphic. And in a possible shout-out to Monster Magnet’s debut, Spine Of God, the very first thing you hear on this 6-song EP is a lengthy bong hit, which segues into a song entitled, “Marijuana.” Go figure. While it’s not as “stoned” as one might hope from the title, they can do more than one thing and they don’t stay there too long. The guitar lick that leads into “Can’t Take Anymore” is good, but the male/female co-lead vocal is really unexpected. Something trippier begins to take over on “Swim” and things take shape musically; the melodic structure/phrasing on this song stands out among everything else on the EP. They nail it, whatever it is. What they’re doing on this record is not really “heavy” at all, but, I’d surmise that’s not what they’re going for either. Think Fireball Ministry, as opposed to the aforementioned Monster Magnet, or maybe, if you’re feeling retro, more Grand Funk Railroad than Deep Purple, but a lot of fun nonetheless. And you gotta love their name. Sooner or later somebody had to do it.
Posted by xokayteamac at 10:32 PM