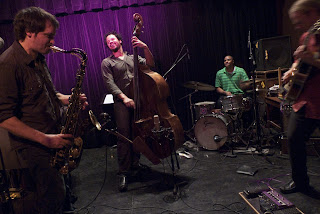 Well it was Sunday night, but I couldn’t shake the suspicion that the staff in attendance at Dante’s for the Skerik show outnumbered the crowd.  It was easy to see why—Skerik’s Bandalabra just played at the Goodfoot recently: twice as much music at half the price.  As part of the Soul’d Out fest, Skerik’s band had been wedged into an evening of performance with about a one hour time slot.  The crowd seemed confused and sedated.  Only a woman in her fifties with pink hair braved the dance floor to show off her salsa strut.
Skerik came with his usual arsenal of effects, using a harmonizer pedal to make himself sound like an entire horn section on his syncopated riffs and screaming into his reed to create a cacophony of distorted mayhem where appropriate.  His playing ranges from something akin to the sounds a Tazmanian devil might make if he swallowed a kazoo to something Charlie Parker might play if he’d picked up a tenor.  He lauded Portland for the prevalence of its nude nightlife and alluded to the old Satyricon, saying that the music scene here had been “all down hill” since then.  When the crowd failed to react to the mention of a long-defunct venue, Skerik retorted, “We play a lot of nursing homes where people get that joke.” 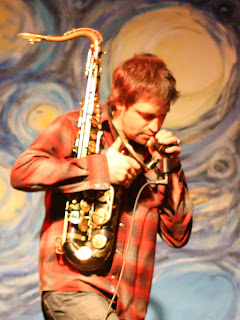 The mood of the improvised set modulated from an Arabian night to a metal melee to circus music and electronica.  Andy Coe added sounds from Galactica by slapping the strings of his guitar with both hands while running it through a phaser.  Andy can play some tasty licks, but tonight he was clean.
The bands member’s all hail from Seattle.   Drummer unparalleled Devon Lewis and Andy Coe are both members of a straight ahead jazz band called McTuff, with whom Skerik has sat in many times, so the chemistry was palpable between the performers as they traded fours and improvised.  The real treasure in this combo, however, is bassist Evan Flory-Barnes, who’s laid back styling, serves as a focal point for the band’s rhythmic dilation.


Unfortunately, the set seemed to end just when folks began to loosen up.  While some members of the audience held out hopes for an encore, the entire band was packed up and off-stage less than five minutes from their last note.  All in all, the show was a bit of an anticlimax—especially since the real versatility of Skerik’s saxophone seems to be underutilized in this arrangement.  But, for a band that cut a record from their first session, fans must hold the promise of rockin’ things to come.
-          Earl Elliott
http://www.myspace.com/576611116
www.facebook.com/SkeriksBandalabra