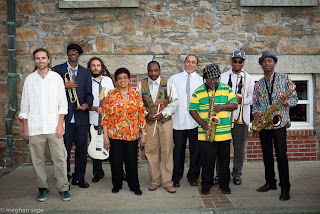 I fell in love last night at the Goodfoot…It was a scene from my high school past:  skinny ties, suit jackets, and doc martens.  The opening band, a ten piece called the Sentiments, featured a full horn section, including a tall brunette on alto in polka dots and cowboy boots.   I liked her immediately.  Drew Carey worked the keys while I gazed amorously at the long-legged alto.  Their singer sounded like a cross between Bessie Smith and Natalie Merchant.  They played a long set and had the whole place jumping to songs like “The Lion Sleeps Tonight” and “One more cup of coffee”.
Around eleven thirty, the Skatelites walked on.  No single band has influenced reggae music like these cats.  My first thought was, “Since when are there white dudes in the band?”  The two original members on the bass and alto played like seasoned veterans.  Nobody in the house was standing still—ska is incomparably danceable music.   A few kids up front were skanking away mercilessly, all elbows and plaid.  It seemed as though the band didn’t want to stop, playing multiple encores and old favorites like “A message to Rudy,” “The Isrealites,” and Bob Marley’s “No Woman, No Cry”. 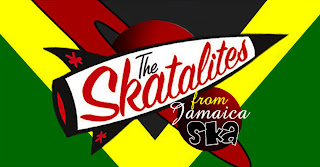 It didn’t work out for the sax player from the sentiments and me, however.  I didn’t have an opportunity to catch her until she was on her way out the door.  Because I am the creepiest guy on the planet, I told her that the next time I saw her I’d chase her down.   It was intended as a compliment…