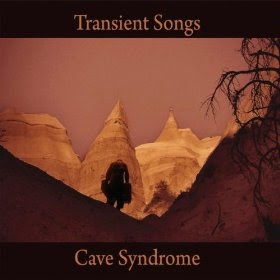 As a lifelong resident of the Pacific Northwest, I have to say that it has been quite a while since I have heard anything as good as Transient Songs coming out of our backyard. Cave Syndrome is the second album from the "group," which is actually a man by the name of John Frum and his occasional guests.

Cave Syndrome reminds me an awful lot of some of the best bands nobody ever heard in the early nineties. Groups such as Sadhappy, Adrian's Childhood, and Paisley Sin never caught a big-time record contract, but they were all great. Frum's music has something in common with each of them, but there is also a NW indie spirit about the disc that is reminiscent. The name of his record label alone is good for a chuckle: Indian Casino Records. His pop sensibilities are spot on too. The liner notes mention The Church and The Chameleons as influences, and the statement is certainly accurate.

The record begins with "In This Darkness Light Seeps Through," which despite the foreboding title is one of the more upbeat tunes. It strikes me as something Wayne Coyne might have come up with after an overdose of George Harrison's All Things Must Pass.

The trippiness, reverb and fog get deeper as the album progresses. "Smoking Slows The Healing" builds into a transcendent guitar frenzy that becomes absolutely hypnotizing, as does "Greenwood Backyards." The most fascinating song of all, though, is titled "The Cancer In Our Bloodlines." It is as if both The Church and The Chameleons decided to collaborate on a version of "A Day In The Life." The opening segment is a virtual Steve Kilbey carbon, while the latter portion would not have been out of place on side two of Script Of The Bridge.

John Frum hails from Texas originally, but we won't hold that against him. Especially as he had the good taste to enlist Chris Hanszek to master the disc. Hanszek founded C/Z Records back in 1985, and released the first collection of grunge, Deep Six shortly afterward. Transient Songs belong in such exalted company, and I hope that Cave Syndrome finds an audience. It is a gorgeously nuanced album.