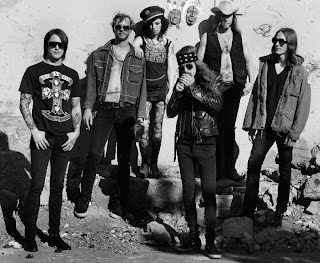 Strike #1: You name your band Black Pussy. Now I'm no puritan and can cuss a blue streak when properly motivated, but I'm starting to feel numb from the recent trend of naming your band something outrageous and offensive just to get noticed. It's like all those bands with F-bombs as part of their names. It seems as puerile and sophomoric as an afternoon of Bubba the Love Sponge on Sirius--it's just relentless after a while, and it's made even worse by journeymen music critics who line up to review the album because they get a cheap thrill from dropping said F-bombs on the printed page. I'm not even going to tell you what happened when I Googled "Black Pussy on Blonde," either--I just wanted to get the scoop on this band for y'all, and I didn't need to see all that, well, stuff.

Strike #3: Well, that's the thing...strike #3 never comes. Black Pussy's On Blonde is actually pretty cool. It's a retro sound that's a little hard to define, '70s hard rock on the cusp of punk, and I can probably best describe it like this: When I was a teenager in the late '70s, we were secretly enthralled with the coming of so-called punk rock, but it was a different type of punk than we think of now. True hardcore was still underground, and the stuff we thought was so different--the "new" wave--was simply tighter and faster rock without the 12-minute guitar solos. Black Pussy's sound, in other words, fits in with an afternoon orgy of Ramones, the Runaways, the Stooges and maybe even a little Kiss. It's simple, it's tight and it doesn't give an F-bomb.

Heck, even that bong hit in the beginning eventually justifies itself. That's because the first song, "Marijuana," isn't a celebratory ode to pot. When the chorus kicks in--she wants your, she wants your, she wants your...MARIJUANA!--it's downright funny, especially if you knew that particular girl back in the day. (Hi, Carmen!) When Black Pussy gently shifts their musical palette from song to song, a move so subtle and pure you'll probably miss it, it's only to add a cowbell (or a wood block; this is pretty lo-fi stuff) or maybe switch vocalists. The purpose here is to loudly declare that self-important lyrics and pretty melodies have no place in true rock and roll, and that's it.

So today's lesson is not to judge a CD by its cover, or a band by its name. Or maybe the lesson is not to cuss or you'll get your mouth washed out with soap. Either way, On Blonde reminds me of a friend I had back when I was in college. When a band met his approval, he said they "rocked amply." You've heard it here from the Vinyl Ananchronist: Black Pussy rocks amply. Now look that up in Google.
Posted by xokayteamac at 2:14 PM