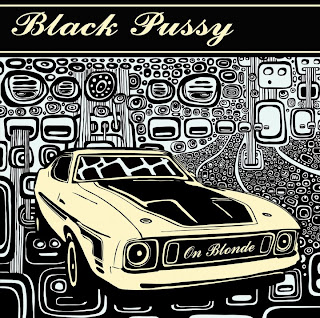 Entering into the sexpot moniker sweepstakes behind Nashville Pussy, Alabama Thunderpussy and Pussy Galore comes Portland's Black Pussy. Also known as Black Pussy (IS GO), you can rest assured this is another gang of garage dwellers who may or may not toke as much as they would have you believe of their "stoner" tagged rawk.

Frankly, the term "stoner" has now become a passe buzz phrase carrying less buzz and more static. While Bongzilla and Weedeater are exactly the stoners they purport themselves to be--particularly in their tone-saturated hallucinogenics--stoner as a music description is now so broad it often hardly carries little of the pot element within its sound. The Mars Volta is considered by some to be stoner on top of mind-melding punk-prog. Such is the weird way of the music world.

Thus it's almost hopeless when a band marches in with a self-placed stamp of "stoner" upon its product, when subliminally you just know there's a marketing ploy behind it. There was a time when stoners were the riff raff of society. Now, thanks to Josh Homme, Fu Manchu, Wolfmother and The Black Keys, there's a strange pride to calling yourself a stoner band. Of course, Steppenwolf was there long ahead of the current crop and a lot of their music really was trippy beneath their blistered protesting. Let's not forget Redd Kross assisted in bridging this generation of young bands to the turbulent days of Hendrix and the Dead.

It's enough to have a provocative name like Black Pussy, but carrying a deliberate stoner sign overtop their heads (going so far as to mock the old sixties and seventies' album audiophile insignias with their coined "Stonersound" jibe) isn't anywhere near as provocative as their name. We could probably trip on the visual of a laidback hump-dee-hump with an afro-coiffed queen, swirling lava lamps, incense and strobes adding to the hazy-moist wet dream Black Pussy insinuates through their very being.

At the end of the day, though, it's the music that counts and Black Pussy makes no shame in plugging through the distorted channels of Kyuss, Fu Manchu and Fireball Ministry. Mastermined by Dustin Hill, who often mimicks Josh Homme vocally to great measures, Black Pussy's debut EP On Blonde shows a hint of promise even while offering the "stoner" genre very little it hasn't already seen.

There's an undeniable Kyuss-Fu kitsch to "Marijuana," "Swim(-A-), "Ain't Talkin' About Love" and "Indiana" straight down to the lacing power chords, wood block/cowbell tempo taps, swirling sub solos and a drawn back vocal approach you know all too well. While "Can't Take Anymore" and "Blow Some Steam Off" pick up the pace with some gnarly acceleration, the theme of Black Pussy is to just take it easy. More than anything, it's evident Hill spent much time with Fu Manchu's California Crossing and King of the Road along with Josh Homme's entire recorded body.

There's nothing inherently wrong with Dustin Hill's songwriting ideology. Nothing wrong with nodding along to the juicy bass rubs oozing out of Black Pussy's amps on "Blow Some Steam Off" like, well...you know, that. It's simply the shaky wherewithal behind the shock value of Black Pussy's name. A stoner band doesn't advertise themselves as such. They often shy away from the tag. A true stoner band just plugs in and lets the waves carry their vibe, not a pre-issued statement.

Labels: Album Reviews: A - J
Posted by xokayteamac at 7:58 AM