Album Review: ‘Strange Like We Are’ by Campfire OK 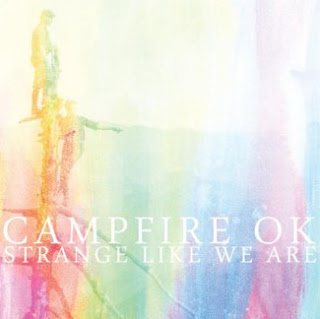 Campfire OK is an indie-folk band composed of a group madmen that know exactly what they’re doing. Their debut album, Strange Like We Are, will be released on February 8, 2011 through Ana-Them Records. As Strange Like We Are progresses, each song has a clear and definitive structure, oozing intelligence in a natural and carefree way. In the album, at times there are moments of carefully construed pure chaos—radiating a brilliance that can only be achieved by artists who truly know both, the science and art of music like the back of their hands.
The anxiety created between the indie and the folk aspects of this band make the hairs on the back of your neck stand up, and your ears perk up. Campfire OK’s manipulation of instruments such as, the brass, banjo, and piano create a tension that strongly supports the lyrics and voice of the band.
Their single, “Strange Like We Are”, starts out with a luring pitch, which build up tension for the vocals. The song develops into what feels like an anthem for people strange like they are, which is supported by clappers, gentle brass, additional vocals “ooo”ing and a heavy, percussion-induced down-beat.
“We Lay in Caves” introduces the album with an eerie, upbeat, yet destructive mood, filled with brass undertones and powerful percussion. Though, the lead voice is distinct, in songs like “Hard Times”, “Not Young Not Old”, and “Magic Tricks”, it sounds annoyingly familiar to a massively produced Broadway song with a typical and easily produced tune.
Fortunately, those set back moments are brief and you are dragged back to a euphoric musical experience. Even the occasional hums, lulls, and “ahhs” align in perfect harmony, speaking louder and fitting the music more perfect than any other lyric. The album also showcases a choir in “Brass” and featured through various songs.
“Complimenting Parts”, “I Would Like Everything” and “Mexico N-O”, though different from the louder, more upbeat songs, have gentle rhymes on the piano and vocals with undertones of crying brass support the elegant and melodic pieces.
With Hannigan performing on the banjo and brass; Dagworth on percussion; Van Der Speck playing the bass and angelic vocals; Goodweather on piano and vocals, and Exworthy on keys and vocals, it is apparent that every member of the band has an equally vital and powerful role in each song through Strange Like We Are.
Currently, the Seattle bound band is practically unknown. However, with their crisp and professional sound, the second they pick up momentum and are discovered by audiences eager to listen to an evolutionary stew of indie-rock, folk and clever instrumentalists, Campfire OK’s unique music will receive the proper recognition
Posted by xokayteamac at 1:38 PM